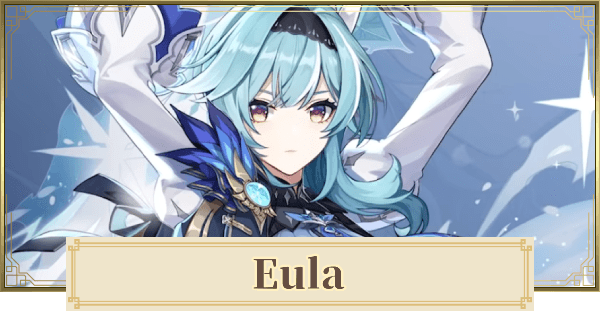 Eula is currently the only 5★ hypercarry that specializes in Physical DMG. She can deal a huge amount of damage with her elemental burst, and her cryo abilities allow her to synergize with electro characters for the superconduct debuff.

Eula is an excellent Physical DPS that can spread Cryo making it easy to deal Superconduct debuff to enemies creating an even higher Physical DMG. This teams further support that potential.

Perform up to 5 consecutive strikes.

Drained stamina over time to perform continuous slashes at the end of the sequence, perform a more powerful slash.

Plunges from mid-air to strike the ground, damaging opponents along the path and dealing AoE DMG upon impact.

Slashes swiftly, dealing Cryo DMG. When it hits an opponent, Eula gains a stack of Grimheart that stacks up to 2 times. These stacks can only be gained once every 0.3s.

Wielding her sword, Eula consumes all the stacks of Grimheart and lashes forward, dealing AoE Cryo DMG to opponents in front of her. If Grimheart stacks are consumed, surrounding opponents will have their Physical RES and Cryo RES decreased. Each consumed stack of Grimheart will be converted into an Icewhirl Brand that deals Cryo DMDG to nearby opponents.

Brandishes her greatsword, dealing Cryo DMG to nearby opponents and creating a Lightfall Sword that follows her around for a duration of up to 7s.

Once its duration ends, the Lightfall Sword will descend and explode violently, dealing Physical DMG to nearby opponents.

If 2 stacks of Grimheart are consumed upon unleashing the Holding Mode of Icetide Vortex, a Shattered Lightfall Sword will be created that will explode immediately, dealing 50% of the basic Physical DMG dealt by a Lightfall Sword created by Glacial Illumination.

When Glacial Illumination is cast, the CD of ICetide Vortex is reset and Eula gains 1 stack of Grimheart.

When Eula crafts Character Talents, she has a 10% chance to receive double the product.

Constellation 1 For A High DPS Increase

Constellation one will boost Eula's Physical DMG by 30% for every Grimheart that is consumed enabling Eula to deal powerful attacks.

How To Use Eula ?

Eula's Burst can deal thousands of damage by itself. It has one of the highest damage multipliers and hits multiple enemies within its range. Since it does Physical Damage, it has few enemies that are resistant to it. Take note that it can also be actively exploded by switching Eula out.

The amount of damage that Eula's Burst could deal is entirely dependent on the charge of her Lightfall Sword. The more the Lightfall Sword is charged, the more damage it will deal when it does explode.

Eula's Elemental Skill and Normal Attacks will charge the Lightfall Sword. To get the most out of her Burst, it's recommended to charge it up as much as possible before letting it detonate.

Eula is able to dish out a ton of damage between her Normal Attack, Skill, and Burst. Her damage output is very consistent and can work against most type of enemies.

Since her Skills scales on Physical Damage, Eula's Normal Attacks also increase in damage when build her Skills. She can easily go against any enemy since there are only a handful of enemies that are resistant to Physical Damage.

Since Eula's main focus is Physical Damage, she does little elemental damage. She does not work well in team comps that are reliant on Elemental Combos.

Does Not Do Well Against Mechanical Enemies

Mechanical enemies, including Ruin Guards and Sentinels, are highly resistant to Physical Damage. Against them, Eula cannot do as much damage. It's better to just bring another elemental DPS in these situations.

Eula Reviews From Other Users

What Is Eula's Tier For You

The Lawrence Clan are known as the nobles who are very famous for their autocracy ruling over Mondstadt, but Eula grew up in contrast to her clan as she vows to seek vengeance that tarnished the name of their clan and finally to clean & redeem her clan's name.

Despite people hating her and the Lawrence clan, she really showed everyone that she is different. She didn't falter and give in to the people who keeps on belittling her hard work. She is now the captain of Reconnaissance Company with the Knights of Favonious.

How Tall Is Eula?

There is no in-game and official data regarding the height of Eula. We compared characters and Eula is Tall comparatively.

How To Get Eula?

Get Eula Through Born Of Ocean Swell Banner

You can get Eula through her own featured wish banner, Born of Ocean Swell. This banner started from May 18 and ended on June 8, 2021.

You forgot to put her BIS weapon which is Song of Broken Pines to recommended weapons.

400k is NORMAL and can be done with C0 Eula and stuff like Bennett buff. My C1 Eula with pretty meh artifact does 300k+ normally.

why is there only VA for english and VA for Japanese but not Chinese...that doesn't make sense.