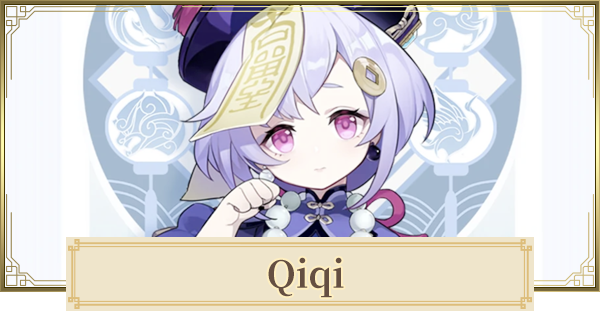 Qiqi has the ability to easily heal the team, making her ideal for the Ocean-Hued Clam artifact set. Because of her off-field Elemental Skill, Qiqi can also benefit greatly from the Tenacity of the Millelith artifact set.

You Can Use ER Sands If You're Having Energy Issues

ER Sands is only recommended if you lack good energy recharge substats and if you're having difficulty maintaining her elemental burst's uptime.

Qiqi has a potential to be an attacker with her fast attacks. She can inflict Cryo to enemies easily making it easy to cause super-conduct enabling more Physical DMG.

Qiqi can easily work with any team comp due to the versatility of her skills and burst. As a healer, she can easily synergize with damage and support characters and outheal enemy damage.

Using the Icevein Talisman, Qiqi brings forth the Herald of Frost, dealing Cryo DMG to nearby enemies.

When Qiqi hits a target with her Normal or Charged Attacks, she regenerates HP for all party members and all nearby allied characters. Healing scales based on Qiqi's ATK. Regenerates HP for current character at regular intervals. Follows the character around, dealing Cryo DMG to enemies in its path.

Qiqi releases the adeptus power sealed within her body, marking nearby enemies with a Fortune-Preserving Talisman that deals Cryo DMG.

When enemies affected by this Talisman take DMG, the character that dealt this DMG regenerates HP.

When a character under the effects of Adeptus Art: Herald of Frost triggers an Elemental Reaction, their Incoming Healing Bonus is increased by 20% for 8s.

A Glimpse into Arcanum

When Qiqi hits enemies with her Normal and Charged Attacks, she has a 50% chance to apply a Fortune-Preserving Talisman to them for 6s. This effect can only occur once every 30s.

Displays the location of nearby resources unique to Liyue on the mini-map.

Constellation 1 of Qiqi gives energy for Qiqi enabling her to cast her Elemental Burst more frequently.

How To Use Qiqi ?

Qiqi's Elemental Skill is an on-field ability that continuously heals the active character. Healing is done in time with the rotation of the Spirit Ball wherein it heals after every 2 rotation. The amount of healing you get depends on Qiqi's ATK.

Besides healing, Qiqi's Elemental Skill also applies Cryo to enemies that are hit by the Spirit Ball. Same with the healing, Cryo is only applied whenever the Spirit Ball circles around the player and hits any enemy around it.

Applies A Talisman To All Enemies Within Its Range

Qiqi's Talisman is a unique status effect that's applied to enemies within her range whenever she uses her Burst. Attacking enemies affected by Talisman with Elemental damage will heal a portion of the damage dealt. Good for Burst Healing a whole team through rotations.

Besides the Talisman, enemies within the Burst's range will also be affected by Cryo. It's an effective way of applying Cryo across multiple enemies.

One Of The Best Healers

Qiqi stands among the best healers in the current roster of characters. Her Talismans offer burst healing, while her Skill is a constant source of healing. She can heal a whole team with no problems.

Although Qiqi is one of the best healers, her kit pretty much cages her into that role. Her Cryo application isn't entirely reliable for battle so she's relegated as just a healer unlike other Healer characters that can also sub-dps or support. Qiqi also provide low energy at 0 Constellation.

Qiqi Reviews From Other Users

Comment or send your opinions about Qiqi in the comments or feedback for a chance to be featured in the article!

What Do You Think Qiqi's Tier Is?

Works In The Bubu Pharmacy

Qiqi is an employee of the finest pharmacy in Liyue, the Bubu Pharmacy. You might have seen or probably will see her in one of the story quests where the traveler will visit the Bubu Pharmacy to ask for some information about certain issues.

Known As A Zombie

Qiqi was caught in the middle of a fight between the adeptis and the demons and got severely injured. The adeptis felt guilty for having her life taken at such a young age, therefore they have decided to combine their energy to revive Qiqi.

How Tall Is Qiqi?

There is no in-game and official data regarding the height of Qiqi. We compared characters and Qiqi is Small comparatively.

How To Get Qiqi?

Get Qiqi Through Wish Banners

Qiqi doesn't have her own character wish banner, however you can still obtain Qiqi through these permanent banners: Wanderlust Invocation! and Beginner's Wish.

Obtain Qiqi Through Other Character Banners!

You can also get a chance to pull Qiqi through other character's banners. Drop rates for Qiqi will be boosted depending on the banner.

Characters With Same Element and Weapon As Qiqi

Replace Prototype Rancour with The Flute or at least put it up there as an option... playing as Qiqi your main concern is healing and dealing dmg at the same time pair this weapon with OHC(Ocean Hued Clam) artifacts and you'll be dealing dmg passively while healing your team mate more effieciently.

she heal too much she doesn't need any healing buff, build her as a physical dps or sub burst dps is a better choice, add much more value to your team and her e can be useful if you can be creative with artifacts and party choice

Feel like she's underrated. Pairs well with Ganyu, Bennett and Diluc for fiery blizzard team. She's a tank with a solid dodge ability sparing Ganyu when it comes to one hit kills

Qiqi also does work amazing with atk and physical dmg bonus. Mine does have around 3.3k atk and 40% physical dmg bonus , rocks a 4-piece Gladiator Set and Aquila Favonia. And almost everyone does say that she is a literal Monster ^^<3.

Should I use flute as a substitute of aquila favonia?