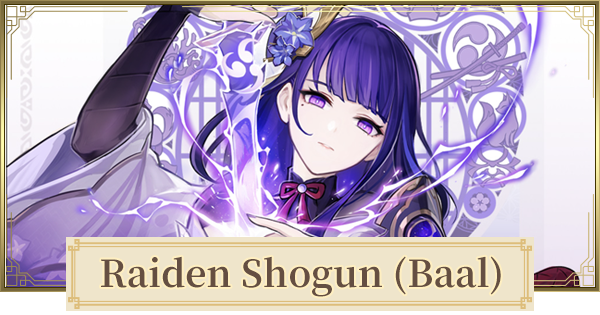 Raiden Shogun is a very strong support that offers high electro application and high energy particle production while still having the ability to deal massive damage with her Elemental Burst.

Similar to Mona, Energy Recharge will also increase the Electro DMG Bonus of Raiden Shogun. This together with the power of Emblem Of Severed Fate, will make Raiden a great Burst DPS and Battery.

Since Energy Recharge will already increase Electro DMG Bonus, it is recommended to use ATK% goblet to increase the base ATK where Damage will be calculated.

If you are using a weapon that boost attacks such as Engulfing Lightning and other five star weapons, it is recommended to use an Electro DMG Bonus Cup instead.

Raiden can provide stable Energy with her Elemental Burst and consistent Electro Status with her skill making her an amazing support for characters that deals powerful Burst Damage like Eula.

Performs up to 5 consecutive spear strikes

Consumes a certain amount of Stamina to perform an upward slash.

Plunges from mid-air to strike the ground below, damaging opponents along the path and dealing AoE DMG upon impact.

The Raiden Shogun unveils a shard of her Euthymia, dealing Electro DMG to nearby opponents and granting nearby party members the Eye of Stormy Judgment.

When characters with this buff attack and hit opponents the Eye will unleash a coordinated attack, dealing AoE Electro DMG at the opponent's position. The Eye can initiate one coordinated attack every 0.9s per party.

AoE Electro DMG, using Musou Isshin in combat for a certain duration afterward. The DMG dealt by Musou no Hitotachi and Musou Isshin's attacks will be increased based on the number of Chakra Desiderata's Resolve stacks consumed when this skill is used.

While in this state, the Raiden Shogun will wield her tachi in battle, while her Normal, Charged, and Plunging Attacks will be infused with Electro DMG, which cannot be overridden. When such attacks hit opponents, she will regenerate Energy for all nearby party members. Energy can be restored this way once every 1s, and this effect can be triggered 5 times throughout this skill's duration. While in this state, the Raiden Shogun's resistance to interruption is increased, and she is immune to Electro-Charged reaction DMG. While Musou Isshin is active, the Raiden Shogun's Normal, Charged, and Plunging Attack DMG will be considered Elemental Burst DMG. The effects of Musou Isshin will be cleared when the Raiden Shogun leaves the field.

When nearby party members gain Elemental Orbs or Particles, Chakra Desiderata gains 2 Resolve stacks. This effect can occur once every year 3s.

Each 1% above 100% Energy Recharge that the Raiden Shogun possesses grants her:

Mora expended when ascending Swords and Polearms is decreased by 50%

Raiden Shogun's attack during her Burst, at Constellation 2, will ignore the defense of the enemies enabling your Raiden Shogun to deal powerful damage. Among the Constellations, this one has the most damage increase which is very useful for Burst DPS builds.

How To Use Raiden Shogun ?

The Elemental Skill of Raiden Shogun is a powerful buff that increases the Elemental Burst DMG of the character you are using with it and it also triggers an AOE Electro Slash once you damage enemies that can trigger every 0.9 seconds.

The Elemental Skill of Raiden Shogun has a 25 second duration partnered with 9 second cooldown enabling it to be always active. It is also an AOE which makes it an amazing skill for spreading Electro status.

The first slash of Raiden Shogun's burst is a huge frontal slash that deals deadly damage to enemies. After that all hits will not only deal powerful damage but it will also be recovering the burst energy of the team.

Elemental Skill Does Not Trigger At Shields

To trigger the skill of Raiden Shogun, you need to deal damage to enemies. Because of this, hitting Elemental Shields will not trigger the slash making it ineffective at shielded enemies. To work around this, you can either switch characters or fight multiple enemies while being close to the target to indirectly hit it with the skill's AOE.

To maximize the damage of the Elemental Burst of Raiden Shogun, it is important to have characters with high burst cost in the team. This heavily limits the team options of Raiden Shogun.

Raiden Shogun Reviews From Other Users

Comment or send your opinions about Raiden Shogun in the comments or feedback for a chance to be featured in the article!

What Is Raiden Shogun's Tier For You

Baal is the current Electro Archon, having power over electro, lightning, and storms. However, she did not take part in the Archon War, having only inherited the title years after it.

The Rules Of Inazuma

Unlike the other Archons Venti and Zhongli, Baal continues to rule over Inazuma rather than relinquishing her power. She sought for eternity for her nation and she will accomplish using her own means.

The Raiden Shogun that the Traveler initially met is actually a puppet being controlled by the real Raiden Shogun, Ei. The pupper will act as her body, while she remains in her own real Euthymia to seek eternity.

Raiden Shogun is the only character in Genshin Impact that cannot cook. Because of this, she does not have any special dish.

How Tall Is Raiden Shogun?

There is no in-game and official data regarding the height of Raiden Shogun. We compared characters and Raiden Shogun is Tall comparatively.

How To Get Raiden Shogun?

Get From Raiden Shogun Banner

The rate drop for Raiden Shogun is boosted at the following wish banners.

Characters With Same Element and Weapon As Raiden Shogun

you call her baal at the top but it's now confirmed that baal is her dead sister and that raidens actual name is Ei, so maybe change that

69 >> Just call her Raiden and we're good lol. Calling her Baal is at the very least ambiguous.

Would and r3 Lvl 80 The Catch be better than Lvl70 Skyward Spine? I'm running ER sands and Atk% goblet. I like SS's atk but without the catch I'm down to 220% ER. Worth making the switch? Is there a max to ER I should look out for?

68, Raiden literally says she considered the both of them (Ei and Makoto) to be Baal when Makoto was still alive because she was Baal's body double, Baal's shadow. she is formally known Beelzebul.

Just be cautious of hurting other people over lore.