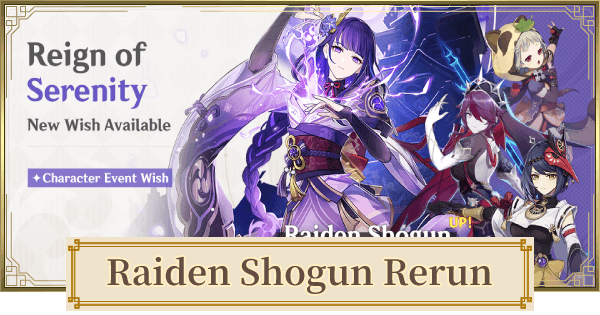 Will Have Double Banner With Kokomi

Raiden Shogun and Sangonomiya Kokomi's banner will be released at the same time. They will share the same Pity counter and 4-star characters.

Between Kokomi & Raiden, Which Will You Pull?

Who Is Raiden Shogun (Baal/Ei)?

Raiden Shogun is the current Electro Archon, possessing the ability to control electro, lightning, and storms. She did not, however, take part in the Archon War, as she only inherited the title years later.

Should You Roll For Raiden Shogun?

Raiden Shogun is one of the strongest Sub-DPS in the game and highly recommend to have due to her damage and support potential.

From her Elemental Skill to her Elemental Burst, Raiden Shogun can dish out consistent damage, enough to even be a Main DPS if built so.

Probably what sets Raiden Shogun apart from other characters is she can give energy to the whole party while attacking during her Burst. This easily helps to compensate for low energy outputs for the whole team.

Raiden Shogun is also a good enabler with her Elemental Skill. It will continuously deal Electro damage in sync with the active character's attacks. It also has a high uptime!

If You're Getting Raiden Shogun, Get Kujou Sara Too

Kujou Sara is one, if not the best support for Raiden Shogun. At higher constellations, she can buff Electro characters with a 60% Crit DMG increase, highly valuable with a Raiden-focused team.

Get Bennett Or Increase Constellations

Bennett is also another great support that you can get from the Banner. He's one of the best supports in the current Meta and is a must-bring in most Abyss teams.

Raiden Shogun has huge potential to become a powerful damage dealer. She's a great Main DPS and Sub-DPS and is a highly recommended character to have on your roster.

Kujou Sara is one of the best Electro Supports in the game. In particular, she has great synergy with Raiden but will also work with other Electro characters. Having her at higher constellations is best.

Bennett is one of the strongest characters in the current Meta. He's highly flexible with his Burst not only healing, but buffing the damage of characters. He can easily fit in any team, except when he's at C6.

Xinyan is a shielder sub-DPS that suffers from split scaling. At high constellation, she can reduce the Physical Resistance of enemies which is a rare and useful trait if you are using a Physical DPS.