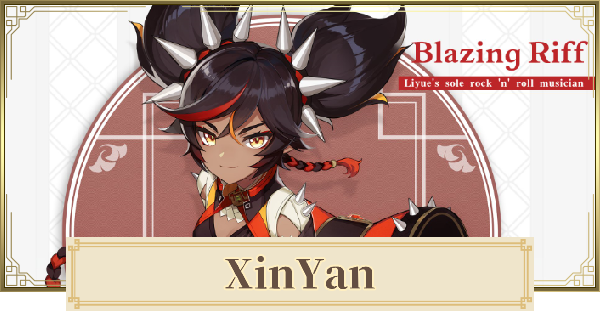 While Xinyan's burst may be like fireworks, however the biggest damage it gives is hidden in the first physical slam. This build increases the damage of that Burst and energy gathering of Xinyan enabling Xinyan to spam her burst dealing tremendous damage to enemies.

A Pyro Clarmore user, Xinyan is different from other Pyro characters since she can create her own shield using her Elemental Skill. She hits hard with a shield, making her a tank of sorts.

Drains Stamina over time to perform continuous spinning attacks against all nearby enemies. At end of the sequence, perform a more powerfult slash.

Xinyan brandishes her instrument, dealing Pyro DMG on nearby enemies, forming a shield made out of her audience's passion. The shield's DMG absorption scales based on Xinyan's DEF and on the number of enemies hit.

The shield has the following special properties:

Strumming rapidly, Xinyan launches nearby enemies and deals Physical DMG to them, hyping up the crowd. The sheer intensity of the atmosphere will cause explosions that deal Pyro DMG to nearby enemies.

The Show Goes On, Even Without An Audience...

Decreases the number of enemies Sweeping Fervor must hit to trigger each level of shielding.

When a Perfect cooling is achieved on an DEF-boosting dish, Xinyan has a 12% chance to obtain double the product.

With Constellation 2, the Elemental Burst of Xinyan will have a 100% Crit Rate. With this, you can just build the Crit Damage of Xinyan if you are only using her as a Burst Support.

With the 4th Constellation of Xinyan, she can decrease the Physical resistance of enemies further increasing her already powerful Elemental Burst and becomeing a descent support in Physical Comps.

How To Use Xinyan ?

Use To Get A Pyro Shield

With every use of Xinyan's Shield, you will get a Pyro shield that will last until it's depleted or expired. It will stay on the field even if you switch out of Xinyan.

Enemies near you when you use Xinyan's Elemental Skill will be hit by the Pyro that will surround her. It's a multi-hit attack and can be used as a set-up for either Vaporize of Melt.

Xinyan's Burst is an explosive release of Pyro! When you need to deal damage to enemies or if you need to apply Pyro to multiple of them, this is an easy way to do so.

Get A Shield After Its Use

Besides it's offensiveness, your active character will also get a shield after unleashing the Burst. The stregth of the shield will depend on your Xinyan's stats.

Xinyan is a reliable shielder Sub-DPS, capable of providing extra damage and reactions while still being able to shield the team. Both of her skills will give shields when used.

Kit Is Hard To Understand For Beginners

Xinyan has a bit of a learing curve to use. Although her Skill her straightforward, it's how she's supposed to be built that can be confusing to the new players.

Xinyan Reviews From Other Users

Got any thoughts and reviews about Xinyan? Send us a feedback or ▼comment below for a chance to be featured in this article!

Comment or send your opinions about Xinyan in the comments or feedback for a chance to be featured in the article!

Xinyan is a well-known performer from Liyue who specializes in Rock N' Roll genre. Her music may not be appealing to others, but this will not stop her from spreading her love for Rock N' Roll.

Wants To Have A World Tour

Xinyan aims to have a world tour around Teyvat in order for people to know more about her love for the Rock N' Roll genre and make people appreciate the art of Rock N' Roll!

More coming soon as we will update this section once Xinyan's own story quest is officially released! Check back again to get more updates.

Meet with Xinyan once again in various in game events, together with the other characters that were also featured in the game event.

How Tall Is Xinyan?

There is no in-game and official data regarding the height of Xinyan. We compared characters and Xinyan is Medium comparatively.

How To Get Xinyan ?

The rate drop for Xinyan is boosted at the following wish banners.

Obtain Xinyan Through Other Character Banners!

You can also get a chance to pull Xinyan through other character's banners. Drop rates for Xinyan will be boosted depending on the banner.

Characters With Same Element and Weapon As Xinyan

pov: you pulled c3 xinyan on yoimiya banner and have no good pyro

Her shield does not imbue allies or herself with pyro. It generates a Pyro DoT if 2+ enemies have been hit with her second talent. 3+ without.