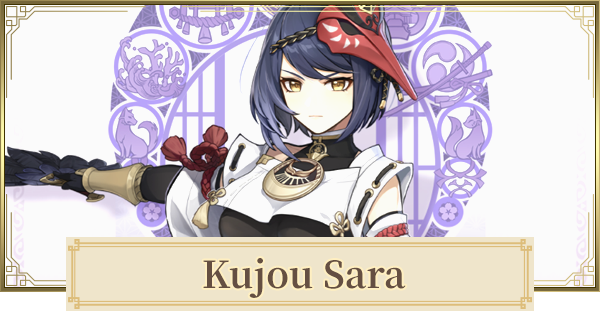 Kujou Sara can buff the team using her Elemental Skill and recovers the energy of teammates making her an amazing support. However, her skill buff only last for 6 seconds which limits the team she can support. She works well with character that snapshots or one shot comps that does not require long duration of buff.

Perform up to 5 consecutive shots with bow

Perform a more precise Aimed Shot with increased DMG. While aiming, crackling lightning will accumulate on the arrowhead. An arrow fully charged with the storm's might will deal Electro DMG. When in the Crowfeather Cover state, a fully-charged arrow will leave a Crowfeather behind after it hits.

Retreats rapidly with the speed of a tengu, summoning the protection of the Crowfeather. Gains Crowfeather Cover for 18s, and when Kujou Sara fires a fully-charged Aimed Shot, Crowfeather Cover will be consumed, and will leave a Crowfeather at the target location. Crowfeathers will trigger Tengu Juurai: Ambush after a short time, dealing Electro DMG and granting the active character within its AoE an ATK Bonus based on Kujou Sara's Base ATK. The ATK Bonuses from different Tengu Juurai will not stack, and their effects and duration will be determined by the last Tengu Juurai to take effect.

The tengu race have never lacked for exceptional talents who have received an Electro Vision. It's just that they often habitually chant praises to the Electro Archon while manipulating Electro. The chants go something like this.

When dispatched on an expedition in Inazuma, time consumed is reduced by 25%.

While in the Crowfeather Cover state provided by Tengu Stormcall, Aimed Shot charge times are decreased by 60%.

When Tengu Juurai: Ambush hits opponents, Kujou Sara will restore 1.2 Energy to all party members for every 100% Energy Recharge she has. This effect can be triggered once every 3s.

With Constellation 2, Kujou Sara will leave a Crowfeather at the place where she teleported. Making you no longer need to perform a charge attack when buffing a teammate.

How To Use Kujou Sara ?

Kujou Sara can buff the team while dealing Electro damage to enemies. She works the best as a team buffer that will only be on the field during the start of the combo with your characters or when her Elemental Burst can be unleashed.

Kujou Sara can buff the team greatly and similar to Bennett, it scales from her Base Attack enabling Kujou Sara give powerful buff to the team. The buff can both come from her Burst and Elemental skill which makes it have 100% uptime so long as you often switch to Kujou Sara.

Short Duration Of Buff & Difficult To Use Support Abilities

The buff provided by Kujou Sara only last for 6 seconds. This limits the team comps that can work with the buff that Kujou Sara provides. Her ability to restore energy is also often ignored because of the time it take to trigger.

The normal attacks of Kujou Sara is slower than average Bow users making her not suited for the Main DPS role. Her Elemental Burst, while it spreads, has many spots that is not being hit by its activation.

Kujou Sara Reviews From Other Users

What Is Kujou Sara's Tier For You

A General Loyal To The Shogun

An enforcer to the Shogun will, Kujou Sara is loyal to a fault and will do everything she could to carry out orders. Although she is a general of the Shogunate, she's reasonable and is willing to at least listen to even the rebels.

A Tengu From The Kujou Clan

Kujou Sara is a Tengu, giving her mystical abilities including unrivaled speeds and black wings. She was adopted into the Kujou Clan, the main family of the Tenryou Commission.

Kujou Sara appeared as the general of the Army against the resistance of the Archon Quest Chapter 2. Kujou Sara's loyalty was shown in the story quest where she went against her own family who is consipiring with the Fatui.

How Tall Is Kujou Sara?

There is no in-game and official data regarding the height of Kujou Sara. We compared characters and Kujou Sara is Tall comparatively.

How To Get Kujou Sara?

The rate drop for Kujou Sara is boosted at the following wish banners.

Characters With Same Element and Weapon As Kujou Sara

i believe electro related elemental reaction which can not crit,
but electro damage from auto attack (charge attack for sara case) or skill and burst still can crit

Why rise her crit, as suggested? If electro cant crit?

C6, with Full Noblesse will make her AAA support for electro DPS

Her BiS artifact set would be the energy recharge set since one of her talents helps gain more particles for the entire team for every 100% of er she has.