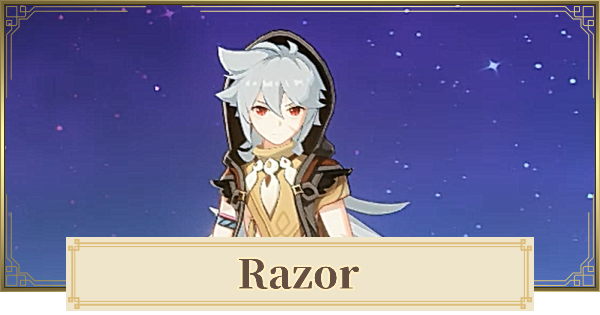 This whole build revolves around increasing Razor's Physical DMG and making him a strong main DPS for the team. As any main DPS build, you do need to build a good amount of CR/CD for him.

Better To Build CR/CD Through Artifacts

If you have a Physical DMG Claymore, it's better to use it then use your Artifacts to build for CR/CD instead. This is due to the fact that you can only build Physical DMG through your Artifact skill, Goblet, and Weapon so might as well take advantage of it.

As a main DPS, you need to build as much Crit Rate and Crit DMG for Razor. Energy recharge can also be built, but it's on the low-end of priorities. Do note that Elemental Mastery is not needed for a Physical DMG build so it's best not to have it.

Other Characters That Works With Razor

Notes About Team Comps For Razor

Razor is a pretty selfish main DPS and you will need to center your team comp around him. He only works with Superconduct teams since his Electro application isn't that good and his multipliers are not high when it comes to elemental DMG.

Razor Guide - How To Use Razor?

Since you want to use Razor's Burst as much as possible, use his Elemental Skill to increase your Energy Recharge. This also allows you to gather particles to charge it up faster.

Can Be Used For Farming Ores

Razor's Burst is a purely offensive ability where he deals both Electro & Physical damage with every normal attack while it's active. Use this to deal tons of damage against enemies in the field.

Should You Get Or Wish For Razor?

Pull If You Need A Physical DPS

Razor is an on-field DPS whose strong suit is his Physical DMG. He's a good main DPS, but you will need to build comps around him to fully utilize his DMG.

Constellation 1 For A More Stable Burst

Razor as a main DPS requires a high uptime for his Elemental Burst. Constellation 1 helps him gather enough energy to consistently have his Burst.

Razor at Constellation 4 is able to decrease the defense of the enemy, enabling him to deal more damage per hit.

Who ever suggest diona as good combo with archer should not be taken serious. They work horrible together and on surface only could sound as good idea. So person that suggested that have no clue

You can also combine Pale Flame 2p set with Bloodstained Chivalry 2p to get permanent +50% Phys DMG increase (+25% from each one) which is almost equal to 4p Pale Flame.

why is the Archaic recommended over the snow stombed starsilver on f2p? I'm pretty sure the Phys DMG boost is greater than the ATK% DMG boost