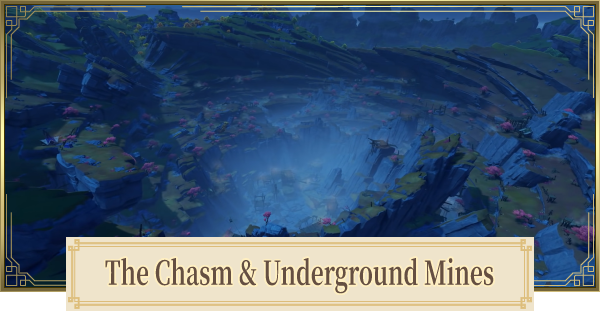 Located At The Right Side of Lingju Pass & Qingxu Pool

The Chasm is located in Liyue beside Lingju Pass and Qingxu Pool. It is said to be a mining district but all work inside its mines were suspended until it's recent opening.

The Chasm goes deep underground, expanding in a network of tunnels and paths. Enshrouded in mystery, the Chasm's underground area offers new adventurers something to explore in every corner!

In order to gain access to the Underground Mines of The Chasm, you will have to progress through the Chasm Delvers quest line. In particular, completing the Surreptitious Seven-Star Seal Sundering opens the entrance to the unground section.

Secret Of The Chasm 2.6 Update

The Ruin Serpent is a new world boss added as part of The Chasm. Since it does not require any prerequisite quests to unlock, you can immediately head to its location at The Serpent's Cave inside the Underground Mines and fight it.

Black Serpent Knights are enemies that come in different variants. They're not as commonly found within The Chasm, but there are specific areas wherein you can find them.

Floating Fungus are adorable, but they are hostile creatures found in The Chasm. So far, there's only a single type of them, but there's a chance more will be added similar to what happened to the Specters.

This material drops from the new enemies, Floating Fungus found within The Chasm: Underground Mines.

Fungal Spores Location & How To Get

The Lumenstone Adjuvant is an essential gadget for exploring The Chasm. Besides providing light, it can be used to clear the dangerous Oozing Mud found within the mines.

Lumenstone Adjuvant Location & How To Get

Starshroom can easily be found around the underground section of The Chasm. It glows against the darkness of the mines making it visible!

Starshroom Location & How To Get

Lumenspar Location & How To Get

Sproutrocks are rocks that can enhance your jumping ability that will help you reach a higher spot easily. Just beware that although it increases your jumps, it does not save you from fall damage.

These can be used to replenish the charges of Lumenstone Adjuvant. The Lumenlamps often need to be charged first before they can be used indefinitely.

Once your Lumenstone Adjuvant reaches level 3, you are able to destroy Oozing Concentrations and muds near you. At higher levels, it can also cleanse higher level concentrations.

Oozing mud will continuously drain your HP level, Lumenstone Adjuvant charges, and as well as affect your mobility.

Oozing Concretions can sometimes be found in some Dark Muds. This purple light thing has a certain level of emission strength. You can use the Blooming Light to destroy the concretions.

There will be monsters are inflicted by the sludge coming from the concretions and dark mud, you destroy the mud and concretions you will have an advantage in battle.

A magical array that was built by Ningguang to seal the areas of the Chasm. They must be destroyed in order to gain access to The Chasm: Underground Mines.

You can charge these cage-shaped Geo formations with Geogranum and use them to destroy Bedrock Keys. Hit these cages to be able to send a Geogranum to a Bedrock Key and damage it.

These geo pillars are said to be bearing the trauma from an ancient battle. Once these rocks got hit by explosions, it will produce a "Resonant Quake" resulting in the land shaking.

Similiar to the Pile of Rocks that we have encountered before, this Unique Rock has a twist in it. The number of symbols indicated on the rocks has something to do with the number of resonance it needs to receive.

You will be encountering a certain mechanism around The Chasm that is somewhat similar to the pressure plate. Activate the mechanism and locate the traces of a treasure chest.

Aside from the real usage of the Seelies, this mutated Seelie can also replenish the energy of the Lumenstone Adjuvant when you stay closer to them.

Hidden Achivements - Mining Records & If Not Us, Then Who?

There are 3 missing records that can be found at The Chasm & Underground Mines.

Locate & interact all of the missing records and you can complete the achievement: The Chasm Mining Records.

A total of 4 Fatui action logs are scattered at the depths of The Chasm: Underground Mines.

If Not Us, Then Who? Achievement

Locate & interact all of the Fatui action logs and you can complete the achievement: If Not Us, Then Who?

The Chasm was officially announced during the 2.5 livestream that it will be released in the 2.6 update of the game. It was finally added with the 2.6 update's release on March 30. 2022.

400 days ago people already talk about this place lol

So.. The Chasm is part of Sumeru?

Answer to the question below me:

Because it is stated in many npc's dialogue that the chasm is a mining location of liyue. But it's closed for now since there are many accidents and strange thing happens

I always thought the chasm was what they called space. like those black parts of the map is called the chasm. what made you guys think it is an actual place? did mihoyo ever said something about it? because chasm is the synonym of void.