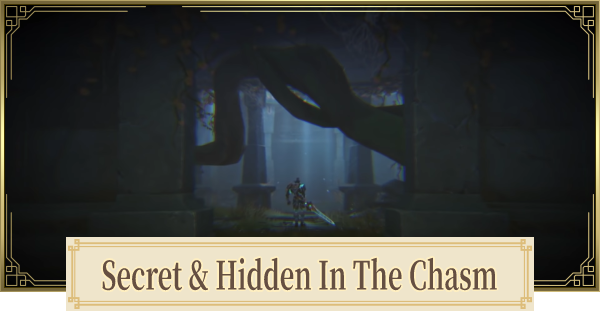 Secret & Hidden In The Chasm

Luxurious Chest In The Chasm

Nameless Ruins - In The Upside Down Ruins

There's a Luxurious Chest at the bottom of the upside down tower (Nameless Ruins) in The Chasm! Follow the steps below to get to the treasure #GenshinImpact #Genshin #Genshintwt pic.twitter.com/WiqL8NO7P5

At the very bottom segment of the upside down tower found in the Nameless Ruins, there's a Luxurious Chest! You'll need to do a bit of platforming to get to it.

Glowing Narrows - On Top Of Xamaran

What are you hiding, Giant Glowing Mushroom? Ah! It's a Luxurious Chest at the very top of its cap!

Watch our video below to learn how to get to this Treasure #GenshinImpact #Genshin #Genshintwt pic.twitter.com/4fy56BlJUI

There is a Luxurious Chest at the very top of the Giant Glowing mushroom in the Glowing Narrows. You will need to climb the vine in a nearby wall to be able to get to it!

Get a secret achievement from acquiring the Shriveled Seed hidden behind a puzzle in the oasis south of The Chasm: Main Mining Area. It also gives a hint to Sumeru!

Shriveled Seed Location & How To Get

Nine Named Black Serpent Knights hold the nine Orb of the Blue Depths needed to unlock the secret room in the Nameless Ruins. Defeat them to get access to the treasures inside the hidden room!

Orb Of The Blue Depths Location & How To Uses

Junwe has been searching for Uncle He and you can finally help her find him in the Missing Miner quest. You'll find him in a section of the Underground Waterway.

After opening the Hidden Room with the Orbs of the Blue Depth, you can get to the treasure and a mysterious letter. Learn the contents of the letter in our guide!

Mysterious Letter In The Chasm Underground

The Nine-Word Rumor In The Chasm Underground

Glowing letters that mysteriously disappear when you go near them. Learn how to be able to solve this puzzle and get the hidden achievement for it!

There are 2 map fragments from Treasure Hoarders camps that are located at The Chasm & Underground. You need it to get the Lumenspar behind the locked gate at the Underground Mines.