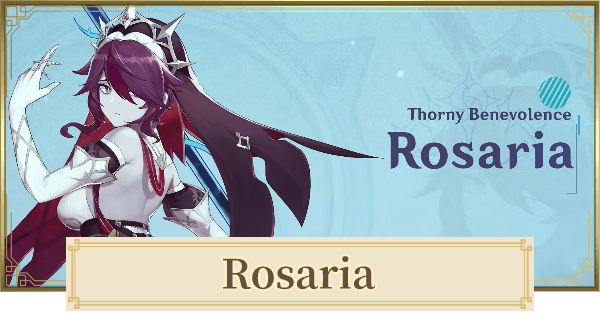 This build focuses on the ability of Rosaria to perform quick and strong physical attacks. Together with a Electro support, Rosaria can easily apply superconduct decreasing the defenses of enemies furthering the damage output of Rosaria.

This build focuses on using Rosaria's Elemental Burst to spread Cryo to enemies enabling your DPS to deal elemental reactions like Melt easier. This build works best with a Pyro DPS.

Since Rosaria can transfer a percent of her Crit Rate to the team. Support Build encourages players to maximize her Crit Value.

Rosaria is an excellent Physical DPS that can spread Cryo making it easy to deal Superconduct debuff to enemies creating an even higher Physical DMG. This teams further support that potential.

Normal Attack: Spear of the Church

Perform up to 5 consecutive spear strikes.

Consumes a certain amount of Stamina to lunge forward, dealing damage to opponents along the way.

Plunges from mid-air to strike the ground below, damaging enemies along the path and dealing AoE DMG upon impact,

Rosaria swiftly shifts her position to appear behind her opponent, then stabs and slashes them with her polearm, dealing Cryo DMG. This ability cannot be used to travel behind opponents of a larger build.

At night (18:00-6:00), increases the Movement SPD of your own party members by 10%. Does not take effect in Domains, Trounce Domains, or Spiral Abyss. Not stackable with Passive Talents that provide the exact same effects.

When Rosaria strikes an oppoenent from behind using Ravaging Confession, Rosaria's CRIT Rate increases by 12% for 5s.

Casting Rites of Termination increases CRIT Rate of all nearby party members (except Rosaria gerself) by 15% of Rosaria's CRIT Rate for 10s. Crit Rate Bonus gained this way cannot exceed 15%.

Constellation 2 For Less Down Time Of Elemental Burst

Rosaria will have a more stable role as a Cryo Burst support with Constellation 2 unlocked for it adds 4 seconds to its duration leaving a 2 second down time for the Elemental Burst.

How To Use Rosaria ?

The primary use of Rosaria's Elemental skill is to use it as Battery for her own Elemental Burst. It will also increase the Crit rate of Rosaria for 5 seconds further increasing the CRIT Rate that Rosaria can spread to the team during her Elemental Burst.

Can Be Used For Mobility

Using the skill of Rosaria will teleport you behind the opponents. This skill is great for mobility though very situational. Take note however that Rosaria cannot teleport behind huge enemies.

▲ Remains after switching characters and increases the CRIT of the team.

Rosaria's Elemental Burst summons a giant cryo spear in front of her slamming it to the ground dealing Cryo DMG. Cryo will spread around it every 2 seconds and last for 8 seconds. This will enable constant Cryo application to enemies around it and is great for producing reactions such as Melt and Superconduct.

Upon casting Rosaria's Elemental Burst, she will increase the CRIT Rate of characters around it by 15% of her own CRIT Rate. This is great for supporting characters who needs CRIT Rate to deal powerful damage such as Eula.

Rare Ability To Give Increase CRIT Rate Of The Team

Rosaria is one of the rare characters that can boost the CRIT Rate of the team. This makes her a great support for any DPS that requires CRIT to deal huge damage and also eases the artifact farming in some situations.

Rosaria is one of the Cryo characters that can deal huge damage while spreading Cryo off-field. Since she is a 4 star character that is available in limited banner, she is relatively easier to get that her competitors Ganyu and Kaeya.

Rosaria's Elemental Burst only last for 8 seconds and has a 15 second cooldown making it an unstable source for Cryo infliction. Unlocking the second constellation of Rosaria will however fix this problem.

Once you set the place for the Elemental Burst, it cannot be moved and has a narrow range. This makes the burst difficult to use when fighting mobile enemies. Freezing enemies however will solve this issue.

Rosaria Reviews From Other Users

Comment or send your opinions about Rosaria in the comments or feedback for a chance to be featured in the article!

What Is Rosaria's Tier For You

One Of The Sisters Of Church Of Favonius

Rosaria is one of the Sisters that worship Barbatos in Mondstadt. However, she is know for her unorthodox actions and often disappears from the church.

Travelers first met Rosaria at Dragonspine during Albedo's Story quest where she helped you search for Albedo in the snowy mountains.

How Tall Is Rosaria?

There is no in-game and official data regarding the height of Rosaria. We compared characters and Rosaria is Tall comparatively.

How To Get Rosaria?

The rate drop for Rosaria is boosted at the following wish banners.

rosaria have alternative skin other than her "fishnet" outfit, she have her church outfit

I have Rosaria C6 and still on progress build

wth why would you use a phys dmg set on her