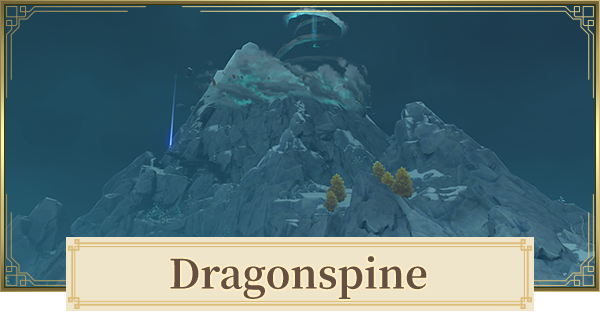 Genshin Impact
Dragonspine How To Unlock & Things To Do

Dragonspine - Release Date & How To Unlock

The Dragonspine area was released in Ver. 1.2 of Genshin Impact. Explore the location and obtain new weapons and items!

Dragonspine can be clearly seen from Mingyun village in game and is located right below the Dawn Winery. It is the tallest mountain in Teyvat so far and is covered in snow.

While in Dragonspine, temperature will have an effect on your character, causing it to take damage and get other debuffs. There will be a bar above your HP bar that indicates the whether or not your character is near being frozen. A frozen character will periodically lose HP.

Showcases A Different Kind Of Exploration

Unlike Mondstadt and Liyue, Dragonspine features a different method of traveling. Find out more by clicking on the links below.

Things To Do At Dragonspine

Destroy Crystal To Unlock Statue Of The Seven

More On How To Destroy Ice Crystal Here!

After doing a puzzle in Dragonspine, you will find a "Ragged Record" which will give you hints on the location of the second and third records. Find them all for a treasure chest and a crimson agate.

Inside The Secret Room Gate

You will find some ruins which appear to be from an ancient civilization that once lived in Dragonspine. Those ruins are blocked and to open them up you'll need to locate several boxes.

Check Out How To Open Secret Room Here!

Rock tombs with several yellow carvings can be found at different locations in Dragonspine. Interacting with them will unlock a hidden door filled with treasure.

Check Out All Ancient Carvings Here!

King of Boar: The Real Ruler Of Dragonspine

You can find a giant Snowboar as a boss in Dragonspine. He can be summoned by heading to a certain location and hunting 3 snowboars. You need to get his meat for the World Quest "Ah, Fresh Meat."

Peak Of Vindagnyr - Unlock & How To Get

Dragonspine has more than 10 locations where you can farm artifacts. They should respawn everyday, so get to know these places and head there regularly!

Can anyone mark the locations of the bonfires and torches in the map and reply to me?
I am struggling to find it. I found one but there are fauti things there and i cant beat it i am lvl 20 only.