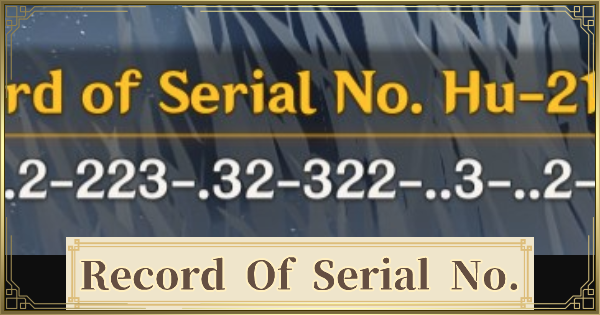 Check this Record Of Serial No. meaning for Genshin Impact. Learn the meaning of the numbers, achievements, ruin guards in Dragonspine, ruin guard codes, how to unlock Futile Endeavor and more.

Some of the Ruin Guard ruins can speak and reveal several numbers. Whatever this number means remains unclear. Their eyes also blink as if they are trying to send a message.

Locating all of the Ruin Guards will unlock an achievement called "Futile Endeavor". This may mean that this is a meaningless act? Not exactly meaningless for you will receive a small amount of primogems as reward.

A Code Pointing To A Treasure / Event?

Many theorizes that these ruin guards are trying to point a location in the map where you will get many items.

Already solve the quest its from the sleeping rune grader giant quest.. 9 code are for the giant who's sleeping on the top. Once you got you will unlock treasure.

My theory is, those numbers are maybe some sort of coordinate. Maybe those ruin guard trying to point at something...
I'll continue to explore dragonspine and try to figure out what the numbers means.