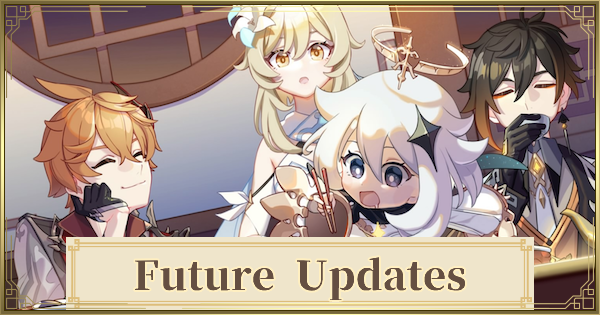 Should You Pull The Albedo Banner?

Mihoyo has announced their projected update schedule for future updates.

Mihoyo also announced that they plan to release new content for the game every 6 weeks.

These events have been confirmed by Mihoyo. They are also based on real-life events.

Scaramouche is a character revealed in the second phase of Unreconciled Stars event, Star of Deceitful Dreams. He is also revealed to be Fatui's 6th member. Just like Childe, there is a big chance that he will also be released as a playable character at some point in the future.

While there is still no information regarding what kind of character Dainsleif is, he was announced to be a playable character voiced by famous voice actors Tsuda Kenjiro (JP) and Yuri Lowenthal (EN).

Kamizato Ayaka is a lady of Inazuma and a character from the closed beta. There is a chance that she will be revealed together with Inazuma, which is the next target location of Traveler in the main story.

The Adeptus Xiao who was in closed beta and appeared several times in the Main Story Quest might be released as a playable character in future updates.

A new character facing Barbara is shown in a post made by the Official Japanese Genshin Twitter account. This mysterious "sisterly" character will appear as part of the story of Ver. 1.2 of Genshin Impact.

In the main story, Inazuma was mentioned to be the next destination of Traveler. However, entering would likely be difficult, as it is currently not allowing any outsiders in. NPCs who are fleeing from Inazuma because of its strict and dangerous environment have also been spotted in Liyue.

Zhongli mentioned that Inazuma is ruled by the Bakufu, which is trying to gather all Visions.

In a recent Facebook post by Mihoyo, they announced their strict stance against leakers of information from beta testing.

While we have received multiple reports of leaks (for 1.2 and other updates), we have decided not to post information that has not been confirmed by the official Genshin team.