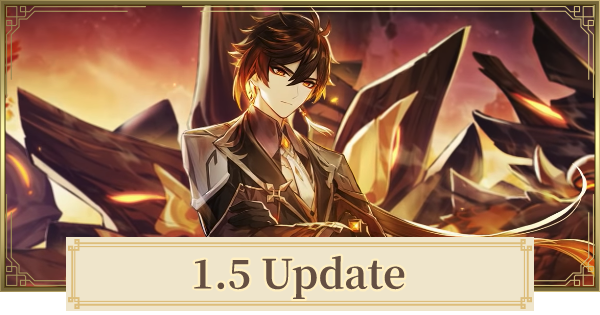 1.5 Update will be released on April 28, 2021 as announced in the latest Trailer

1.5 Update Patch Notes - What To Prepare?

1.5 Update's Preload will be available right before the release of the version. Make sure to download it so you can play the game right away once the game releases.

Local Specialties will not only just be a part of Character Ascension. Those materials will also be crucial in crafting materials for your house. Collect as much as you can while waiting for the 1.5 Update.

Mihoyo has confirmed that there will be a housing system of sort to be added to the game sometime on version 1.5!

A hide and seek event between players. In this event, you can transform into different object to deceive the seeker.

Play the event and receive a free Diona! You will need to collect "fractured fruits" for buffs to make your adventure easier.

Get the double of amount of Talent books every pull during the event.

Travel once again with Zhongli on his second story quest.

Interact with Mondstadt's cat girl, Diona, and enjoy her story with her upcoming Hangout Event.

The second part of Noelle's event will also be released on version 1.5

Half Resin Amount For Weekly Bosses

The needed amount of resin for the weekly boss is changed from 60 to 30 for the first 3 bosses of that week.

You can now save the mails you receive from characters or from admins by using this Mail function.

In version 1.5 comes the release PS5 version for Genshin. Together with this is the improvement of in-game performance for Console players.

Eula is the first 5 star Claymore user to have the Cryo element in her arsenal. She's very fluid, incorporating flips when attacking with her Claymore and her elemental attacks.

As a catalyst user, Yanfei can attack enemies directly with fire. She can spread fire and induce elemental reactions with her every attack!

Inazuma Is Currently Under Developement

It was announced in the livestream that Inazuma is currently under developement. Several concept arts was also released so check them out in the article below!

No News About The Chasm

Currently, there are no news about the area near Liyue, The Chasm. It might be released on a later date / versions.

More About The Chasm Here!

2 New Artifacts was announced to be released on Update 1.5.

Several new bosses are to be released on version 1.5.

Azhdaha is confirmed to be released on version 1.5.

Cryo Hypostasis confirmed for 1.5. It is said that it will appear on Dragonspine.

Boring **** by most part. What about this misty dungeon? Is this some sort of of Arknights CC event? LoL you actually censored Sh!t.... Now we going to ban excrements from life?,

Boring **** by most part. What about this misty dungeon? Is this some sort of of Arknights CC event?

is the first banner in update 1.5 is zhongli?

Chasm info is about as braindead as the idiots who started the rumor.