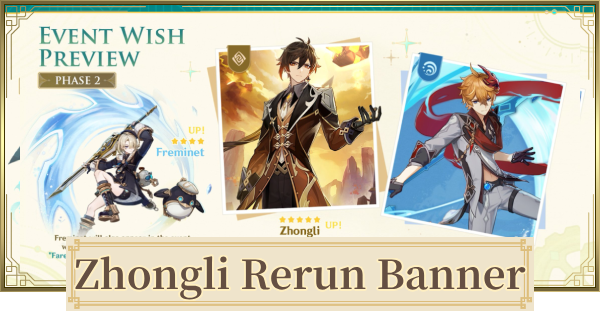 For The Second Phase Of 2.4 Update

Zhongli's banner rerun will be released as part of the second phase of 2.4 Update. The official release date is announced to be on January 25, 2022.

Zhongli Will Be The Featured 5 Star

Zhongli will be the 5 star character in the banner. Characters with him should be able to support his skills.

Should You Roll Zhongli Banner?

Pull If You Need The Best Shields-Bot In-Game

Zhongli is a character that fits any team because of his powerful shields that makes any character invulnerable. It also debuffs the enemies around you when the shield is up. It is recommended to pull for Zhongli if you need shields or feel like your characters loses HP easily.

Zhongli is a five star Geo pole arm character that works well as a support and DPS. His powerful burst, that can petrify enemies upon dealing a huge damage and shield, that debuffs enemies during combat.

Beidou As A Damage Dealer

Xingqiu is one of the best Hydro Support in the game, whereas he can reduce hydro resistance while in combat. His skills are both good as offense and defense.

Yanfei As A DPS

*Yanfei's Rank is temporary. We shall update once testing is done.

Characters in this banner can all provide shields and be great shield supports to the team. They can also support other characters with damage and support.

Gentry of Hermitage The First Banner Of 1.5

Zhongli banner (Gentry of Hermitage) is the next banner after Childe. Possible release date of the banner would be on April 28, 2021

I need zhongli to pair with my baby Ei.
I need a shielder C6 Bennett doesn't help me now at all.

PLZZZ let there be a Zhongli Rerun!!! I have my prototype star glitter waiting for u!!! I need your shield so then I don't die every time a ruin hunter slashes!!!
PLZZZ MIHOYO

Will there be another re run of him soon

I missed this banner, I want Zhongli so bad!! does anyone know when his banner is returning?


**I also want Diluc and Kazuha so badly too, I tried pulling for Kazuha so many times but I can't get him :,(