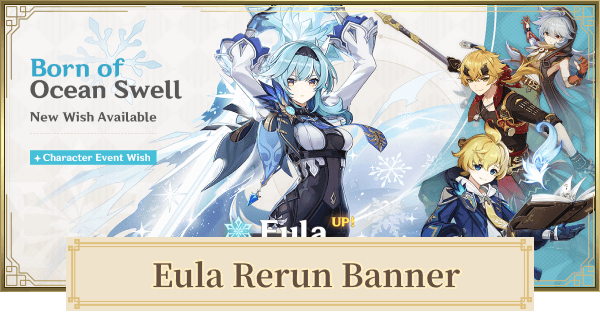 Should You Roll Eula's Banner (Born of Ocean Swell)?

Eula Banner, Born of Ocean Swell, is filled with different 4-star supports that can work extremely well for your main Cryo DPS character like Eula. It is recommended to pull for this banner.

Who are you pulling for?

Best Characters In The Eula's Banner (Born of Ocean Swell)

Eula can deal massive physical damage with her Claymore and she can also deal cryo damage using her abilities making her an amazing pure DPS character.

Even as a 4 star character, Xingqiu's ability to support characters especially Electro and Pyro characters are not to be estimated. He can easily mitigate damage and his elemental Burst greatly increases the DPS capability of any character while giving Wet status to the enemies making it a lot easier to do elemental reaction.

Xinyan has an excellent Physical DMG output and with her shields that can spread Pyro to enemies makes her a great sub-DPS that fits many kinds of teams.

Beidou can not only counter different enemy attacks but she can also spread electro status well making her great for dealing electro related reactions. She can also work as a stand-alone DPS.

I'm the one who posted the "do not believe the increased rates lie", I was able to pull her, but had to spent a good chunk of money for the gems to pull her. That is the only way recent players can pull those desired characters, pay to win, or pay to get (pure luck) T_T

putting eula in ss tier before she's even out >.>