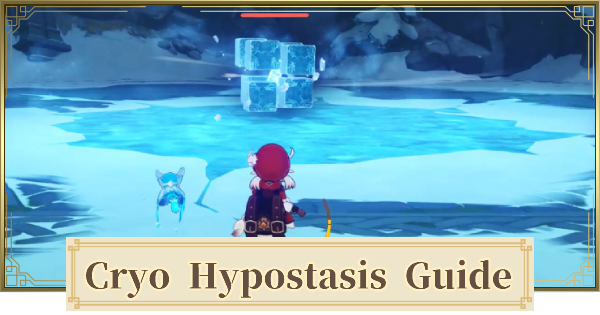 Released In The 1.5 Update

The Cryo Hypostasis was released as part of the 1.5 Update. Players can start fighting it once they have upgraded into the latest version.

Cryo Hypostasis - Location & How To Unlock

Found In The Dragonspine Area

You can find the Cryo Hypostasis in the western part of the Dragonspine Region. It's pretty easy to get to as long as you've unlocked the waypoint next to it.

Check Out The Dragonspine Guide Here

Could Include Eula Ascension Materials

It's highly likely that the items that you can farm from the Cryo Hypostasis are ascension materials for Eula. This is similar as to how the Primo Geovishap's drops were the ones used for newly added characters, Xiao& Hu Tao.

Check Out The Eula Character Guide

With the 20% Pyro Resonance attack buff, Klee can easily trigger melt against the Cryo Hypostasis. Increase it further by using Bennett's Elemental Burst before releasing Klee's own Elemental Burst.

The Cryo Hypostasis hits hard and having a shield to block the damage is important, especially during the last part where you have to destroy its shield. If you find yourself in low health, Bennett will be able to also heal you back up.

By having two Pyro users in your party, you'll get an Elemental Resonance buff giving you +25% attack power. We strongly recommend Pyro for this boss so it will be easier proc Melt

Pyro attacks are effective towards the boss. Amber, unfortunately, does not deal that much damage so it is better to attack with Xiangling.

Cryo Hypostasis - How To Beat & Weaknesses

Running to far from the Cryo Hypostasis will have you frantically crossing to it every time it ends an attack. Instead of running, time your dodges and stay within its close- to mid-range. This will ensure you can damage as soon as it goes down.

Remember To Use Healing Mechanisms

The whole arena where you fight the Cryo Hypostasis is extremely cold, letting you accumulate sheer cold when away from a fire source. There are warming mechanisms around the Arena that you can use to lower your Sheer Cold Bar.

Dash To The Side To Escape Wheel Attack

When the Cryo Hypostasis becomes a wheel, it will charge right at you. It can change its direction, but you can dodge it easily by dodging to the side at the last second. It will not have enough time to turn and hit you.

Stay Close To Its Core During Spike Attack

The Cryo Hypostasis will periodically create ice spikes that will jut from the ground. The best way to escape it is to stay close to the core. While there, you can also put in DPS while waiting for the attack to end.

Use Archer To Push Frostfruits

When the Cryo Hypostasis' HP is low enough, it will create a shield and sprout Frostfruits around the area. Use your archer to push the Frostfruits forward with their charged attack. This is great as Archers do not use stamina when charging attacks!

Co-Op With Other Players!

Check out the forum linked below to have a chance to meet and play with other Genshin Impact players. Remember to also post you UID & Server so other players can add you.

This guide is not complete because we need do some quest to unlock the boss in the area. Need update it.

For everyone trying to access the cave below:
Go to the teleporter left of the hypostasis, then run a bit north and to the right, you see a cave entrance. That leads below it.

For those who can't seem to find how to unluck the Cryo hypostasis (like me before), you need to do the quest "In the mountains" first.

I have to get two agates from dwn below? how do I get them? its then 7th time I have defeated him while trying to get those agates and rly need those

I have no hypostasis... the ice is gone underneath and it will not show up. Does anyone know how to help?