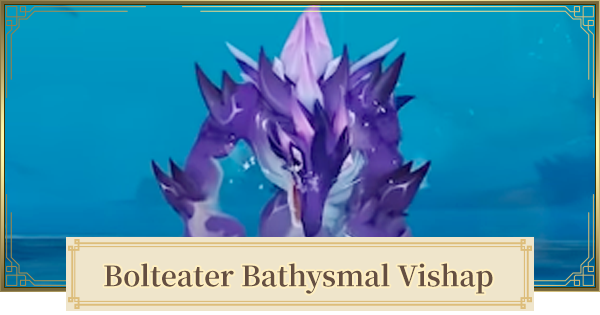 New Enemy For 2.4 Version Of Genshin

Rumors from the Genshin Community mentions that Bolteater Bathysmal Vishap is a world boss expected to appear at the land called Enkonomiya which is said to appear on version 2.4.

You can unlock this World Boss by completing the quest The Subterranean Trials Of Drake And Serpent.

This boss can be found at the center of Dainichi Mikoshi in Enkanomiya.

Track It Using Your Adventurer's Book

You can check some of the locations of Rimebiter Bathysmal Vishap on your Adventure Book from the Menu.

Respawns After A Few Minutes

This boss automatically respawns after a few minutes. You can teleport back to a nearby waypoint to trigger it's reset.

At the start of the fight, they the Bathysmal Vishap will perform combos together that can deal massive damage. During this phase, try to focus on dodging their attacks instead of dealing damage. This will also occur after defeating one of them during the fight.

As soon as the Bolteater Bathysmal Vishap climbs the wall, try to destroy the wall to stun the boss for a few seconds. This will allow you to deal as much damage as possible without having to worry about dodging attacks. (There are 3 walls available for each fight)

Focus One At A Time

As much as possible, try to focus on defeating one of the two bosses first. If you are able to eliminate one of the boss, it will prevent them from performing combo attacks during the rest of the fight.

It is highly recommended that you focus on defeating the Bolteater Bathysmal Vishap (Electro) first, since it is the one vulnerable during the wall breaks.

This list includes characters that uses at least one of the drops from this enemy.