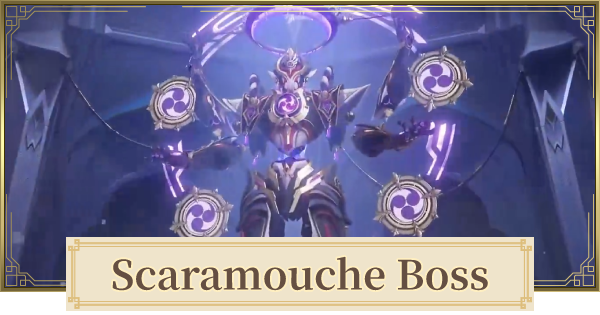 Drops Of Shouki No Kami The Prodigal

Scaramouche Boss Fight - Tips & How To Stop His Ultimate Attack

Recommended To Have A Shield Character

With the amount of attacks Scaramouche has in his arsenal, it becomes essential to either learn how to dodge effectively or have a shielder around. Zhongli is highly recommended here, but characters like Diona and Layla should also work.

During the fight, you may notice crystal-like items on the ground after Scaramouche attacks. Collect this as they will act as energy for your Neo Akasha Terminal!

Prevent The Ultimate Attack At All Cost

When you fully deplete Scaramouche's shield, he will start his ultimate attack. If you don't stop it, your active character will be wiped out, regardless of whether they are shielded or not when it hits!

How To Stop Ultimate Attack

You must destroy all 4 of the Nirvana Engines Scaramouche summons during the windup to his ultimate. They will drop energy shards. Collect this and use the Neo Akasha Terminal's Skill to knock him down!

Big Opportunity For Damage When Knocked Down

Once you successfully knock down Scaramouche, climb up the platforms and unleash all of your attacks against him. This is the best time to damage him as he will be immobile and open for attacks!

Scaramouche was introduced to the game earlier and has been mysterious until now. Despite his youthful appearance, is actually a high-ranking member of the Fatui.

Shouki No Kami The Prodigal All Locations & Respawn Time

You can find the entrance to the Joururi Workshop (Scaramouche Boss Fight) in a small enclove in the Chinvat Ravene. Once you unlock the domain, you can immediately teleport to its location!

Track It Using Your Adventurer's Book

You can check some of the locations of Shouki No Kami The Prodigal on your Adventure Book from the Menu.

Collect Rewards Once A Week

As a World Boss, players can only collect the rewards for this boss once a week. You can fight him as much as you want, but once you collect the reward for the week, the subsequent fights will not yield any materials.

Characters That Uses Shouki No Kami The Prodigal Drops

No Characters Uses Drops From This Enemy

As of the current, there are characters that uses drops from this enemy. Check back for more later!

Weapon That Uses Shouki No Kami The Prodigal Drops

don't know why people r saying it's useless, this helped me a lot.

This guide is worthless.

so just a more cracked version of when we fought raiden...nice