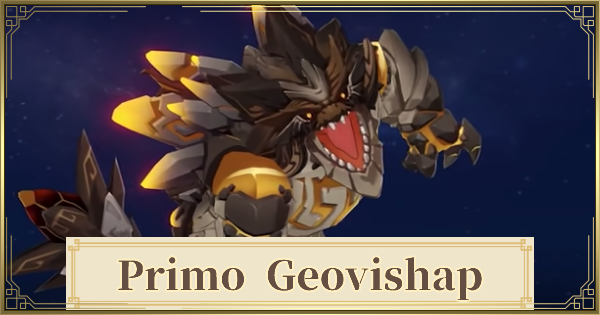 Upon updating your game to the 1.3 update, you will gain access to the Primo Geovishap event immediately. You can then find its location in the map and its special event page will be at the events tab.

More On Vishaps & Where To Find Them Event Here!

The Primo Geovishap can be found in a cave east of the Tianqiu Valley. This is not a new area, meaning it will happen within the world similar to other World Bosses.

Get Juvenile Jade For Xiao Ascension

Requires 40 Resin To Get Rewards

An intense earthquake has shaken Tianqiu Valley, and a long-forgotten threat awakens alongside it. Defeat the Primo Geovishaps who have occupied the caverns of the Tianqiu Ruins and bring back peace back to the land!

Released As Part Of The 1.3 Update

It's been officially announced that the Primo Geovishap will be added to the game with the release of the 1.3 Update. The update arrived Feb. 3, 2021.

Check Out The 1.3 Update News Here

Zhongli and Diluc will be your main damage dealers here as Geo and Claymore works best against the Primo Geovishap. Qiqi will serve as your healer and Noelle will act as your support.

Noelle will act as your main damage dealer and the shields she provides will help you out against surviving against the Primo Geovishap.

By combining Pyro & Cryo resonance, you'll get a high boost to your base damage & crit rate. This can be further boosted by Bennet's ultimate. Healing & shield will be provided by Diona so remember to time your shield skill.

Primo Geovishap - How To Beat & Weaknesses

When the Primo Geovishap goes underground, it will leave behind stones that will explode after a few seconds. It cannot be destroyed and it will leave a fire AoE upon explosion.

Will Also Throw Stones From Tail

If you're too far away from the Primo Geovishap, it can throw stones from its tail. The stones will also explode and create a fire AoE where they have landed.

Will Slam Down After Going Underground

The Primo Geovishap could attack upon getting out of underground. It will slam down where it surfaces, dealing geo damage over an area in front of it.

Use A Shield To Counter Primo Geovishap's AoE Attack

When the Primo Geovishap is about to do its high-damage AoE attack, you will get a notification that says you can counter it by having a shield. You can get this easily by using a Geo character.

Boss Rewards Can NOT Be Shared

The rewards of Primo Geovishap, if it follows the same pattern as other bosses, will not be sharable and can only be claimed via use of resin.

Claiming the rewards from Primo Geovishap would likely cost 40 resins if it follows the same pattern as other bosses.

I need Juvenile Jade to level Yanfei up to ascension level 2
:((

I just used Venti, charge attack then use his charge elemental skill to float when he digs and do his jump attack. Just float away the monster and snipe him, wash and repeat.

all u have to do for any element type of geovishap is to dodge till he does his blast so u can block with a shield. Deal damage to him when u can but be wary he does a lot of damage