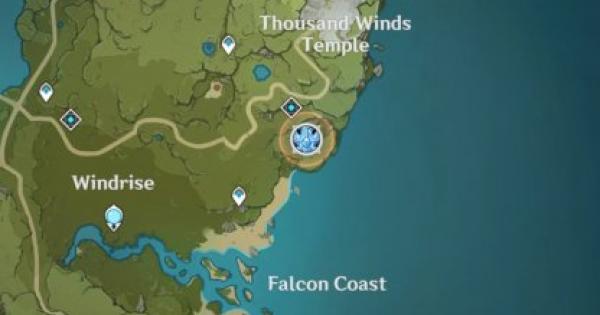 The location of the boss on the south of Thousand Winds Temple. From Mondstad follow the road to east. When you find an cave with many monsters guarding follow that to get to Cryo Regisvine.

By having two Pyro users in your party, you'll get an Elemental Resonance buff giving you +25% attack power. We strongly recommend Pyro for this boss so it will be easier to destroy the orbs and bring the boss down.

Cryo Regisvine is often in Cryo status, hitting it with Lisa's Lightning would cause Superconduct and would inflict a defense debuff!

Pyro attacks are effective towards the boss. Amber, unfortunately, does not deal that much damage. So it is better to attack with Xiangling.

Like the previous party, this team has two Pyro characters that increases ATK by 15%.

Inflict Superconduct using Fischl and attack with Diluc to create a huge damage to the boss with weakened defense. This team uses the same strategy as the previous team however with a stronger / faster attack and stable healing.

As you battle the boss, there will be a glowing orb with am HP bar on the top. You need to destroy that orb to put down the enemy.

Use Pyro Element To Destroy It Faster

The orb is hard to really sturdy but attacking it with Pyro element will cause melt making it easier to destroy.

Move Away When Its Starting To Rotate Its Petals

When its petal starts to rotate it signifies a close range attack and would leave the floor with Cryo damage. Move away and attack using range characters to continuously deal damage.

Wait For The Ice To Melt Before Going Close

Standing on ice will make you receive constant Cryo damage which is fatal for the character. Wait for it to be gone before attacking in close range.

The boss will shoot two lasers in a cross-like pattern hitting everything on its path with Cryo-infused damage. The boss can perform this move twice in a row. To dodge, continuously run behind the boss until it shoots is final laser.

The boss will bend down and rotate its body rapidly dealing a strong cryo damage to everyone in close range. Once the boss starts bending down, move away from the boss to avoid damage.

The boss will hit the ground with its head releasing a wave of ice in front of it. Move to the side of the boss to dodge.

The boss will start by gathering air around its area while rotating its leaves. After a few seconds the boss will crouch hitting everything near it with its leaves dealing a huge cryo damage. It will also leave the floor around it frozen and standing on it would deal constant Cryo damage.

The boss can summon multiple ice spikes that follows you. Run to dodge the spikes.

Once the boss' HP reaches a certain level, it would release a blizzard releasing circular AoE attacks that leaves the floor frozen. Walk away from the area to dodge.

Check Out Other Elite Bosses Here!