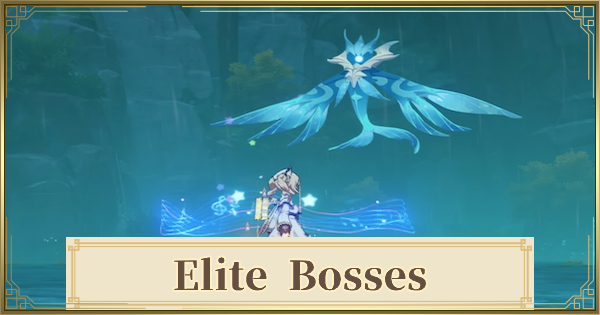 Check out this Elite Opponents & Boss Guide for Genshin Impact. Find out the location, map, respawn timer, weaknesses and battle tips for elite mobs or enemies!

What Are Elite Opponents

To accomplish one of the battle pass missions, you need to defeat 10 Elite opponents.

Get The Anemo Orbs

During the battle, the boss will summon multiple Anemo Orbs. Collect those orbs to stop it from recovering health.

Ride The Wind To Fly

One of the attacks of the boss will cause an uplift. Ride that wind and fly towards the Anemo Orbs.

Attack The Rock That The Boss Is Riding

Destroying that rock would make the boss fall and vulnerable to attacks.

Make Sure To Have A Claymore Wielder

To defeat the boss, you need to destroy rocks within a certain amount of time. Make sure to have a claymore wielder for faster destruction of rocks.

Form A Team With 2 Cryo Characters

When you form two a team with two Cryo Characters, it will trigger Shattering Ice, an elemental resonance, which lessens the effect of Electro element for 40%.

Once Electro Hypostasis is almost out of HP, it will summon 3 Electro Prisms. It can only be damaged by Element-infused attacks.

Make Sure To Have Atleast 1 Pyro Character

Pyro element damages this boss greatly so it is recommended to have at least one Pyro Character in your team.

Destroy The Orb To Stun The Boss

During the battle, an orb will appear behind the boss. Destroy that orb using Pyro element to make the boss unable to move for a certain period of time.

Make Sure To Have Atleast 1 Hydro Character

Hydro will be useful to destroy the Orb that the boss have. For Easier battle, form a party with a Hydro Character.

Destroy The Flame Orb To Stun The Boss

During the battle, an orb will appear on the bottom part of the boss. Destroy that orb using Hydro element to make the boss unable to move for a certain period of time.

No Need To Attack The Body

Even if you attack the body of Oceanid, it will receive no damage. Instead, focus on defeating the water monsters that was summoned.

You will face multiple water monsters at the same time. Since all of them are in Wet Status, you will have an easier time because of Elemetal AOE damage.