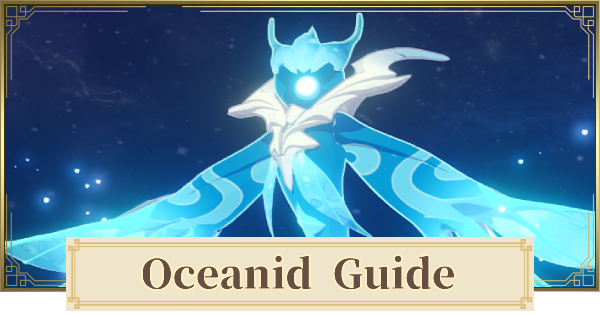 Oceanid is a world boss in Genshin Impact. This guide includes Oceanid location, how to beat, element, weakness, respawn time, resin cost, how to get Cleansing Heart & more.

Oceanid - Location & How To Unlock

In the pool hidden by a large tranch, you can find the arena where you can face off against the Oceanid. You'll know you're in the right area when you find a large stone platform surrounded by water.

Does Not Have An AR Restriction

As a world boss, the Oceanid can fought immediately as soon as the player goes within her arena. There's also no special actin needed to unlock its area. You can simply just walk there.

Reward Depends On Level Of Oceanid

Higher Rarity materials can only be obtained from the Oceanid when it is fought at a higher level. To do this, you need to increase your World Level. At Level 75 and up, all rewards are unlocked and can be obtained.

Requires Resin To Get Rewards

The Oceanid can be fought any number of times per day, but each reward collection will require 40 Original Resin. Condensed Resin cannot be used here.

Original Resin Guide - How To Use & Check

What Is The Oceanid?

"A life-form created from condensed Hydro elements of incredible purity. Often attached to bodies of water. It is said that as water bodies become purer, the Hydro elements within grow more abundant, causing the Oceanids to grow more powerful.It is also said by some that Oceanids were once sea creatures from a home far away who carrier the fragments of a long-dead god to the many corners of the world. Perhaps they did this so that the love their god held for this world could be spread through the waters to all the land..."

Best To Have A Bow-User

There are some Mimics that the Oceanid summons that are flying. The only stable way of damaging them is with a bow user with long-range charged attacks. Fischl and Kujou Sara are best at this due to their element.

Electro-Charged and Reverse Vape will allow you to deal high damage easily against the Mimic since they are always Hydro-Infused. Just be careful with Eletro-Charge because the Arena itself has water on the floor.

If you find it hard to manage the mimics, you can use Cryo character to freeze them in place. This can even be a good set up for Melt!

This team comp is made to easily spready Electro-Charge to Mimics. Raiden Shogun will act as the main DPS with Sara as the support for continuous Electro damage. Jean and Zhongli will provide additional damage while supporting the team's survival.

With Rosaria and Diona, you can easily freeze the mimics to better handle them. Although they are Sub-DPS, most of your damage will come from Xiangling and Fischl since they'll be the ones to proc Vaporize and Electro-Charged.

Oceanid - How To Beat & Tips

Do Not Attack The Oceanid's Main Body

Unlike other World Bosses, you don't actually fight the Oceanid. All you have to do to beat it is to defeat the Mimics that it will summon around the arena. Attacking its main body will do nothing.

Each Mimic type has its own set of attacks. For example, the Cranes & the Flying Birds have long-ranged attacks, while the Boar and the Squirrel are melee fighters.

Some Mimics will leave behind a Hydro Bomb that will explode in a large area around it. To save yourself from damage, you can either use a shield or jump in the water! Make sure that when jump, you will be underwater when the ripples are spread.