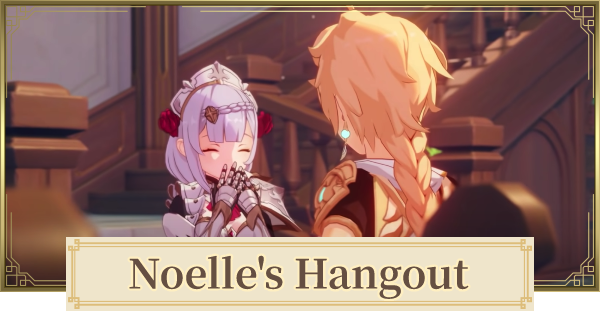 This section contains rumors about upcoming contents. We shall update this article once official information has been released.

There are rumors about Noelle's Second Hangout event to be released on future versions such as version version 1.5.

Given the popularity of Noelle's hangout, it only make sense for it to be given a sequel. However, there are no official announcement about it as of the moment. More About 1.5 Update Here!

Noelle's Hangout Event is released on March 17 with version 1.4 of Genshin Impact. Get an invitation from our adorable knight-in-training and go to places with Noelle!

Hangout Quests will have several endings depending on the choices you made while you are hanging out with the character.

Based on our testing, heartbeat you get for your choices seems to have minimal impact on endings compared to actual key choices. However, keeping a high high mark may provide other benefits, or at least bragging rights.

Ending 3: A Defender's Will Is their Strength

Ending 4: A Maid Above Ground

Ending 6: Whisper Of The Paper Rose

Poll - Which Ending Is Your Favorite For Noelle?

Completing all of endings will unlock several achievements under the Wonders of the World achievements. They're a great addition as they also give Primogems for unlocking them.

This guide is unreliable. Check elsewhere for correct pathways

If you don't even mention what to do after fast-tracking why even put it there at all?
Tried to get Ending 5 by selecting all bottom dialogue after fast-tracking to The Breather (as it seems to say) and it took me back to Ending 6. Waste of time... ugh...

DURING GIFT AND INTENT SAY:

"But now's not the best time to disturb them..."
"No whipping anything up..."

DURING FLEETING LEISURE SAY:
“I'll certainly do my best..."
"...So Quinn feels that Bea has nothing important to say to him..."
"It shouldn't matter, it's the thought that counts."

Ending 5:
"The Knights of Favonius have... maids?"
"Of course, where do you want to start?"
"Knightly Exercises?"
"What you lack is rest."
"Stopping for occasional rest is all part of ensuring that you can train to your maximum ability"
"And speaking of tea, let's have some!"