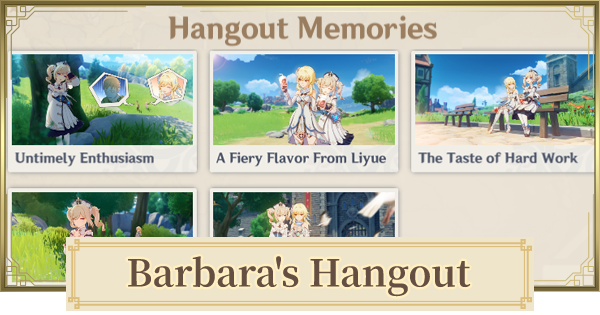 Barbara's Hangout Event is a date event for Genshin Impact. Learn all about, all story endings, branches, choices, how to unlock, Act 1 Wellspring Of Healing, release date, and more about Barbara's Date Event!

Barbara's Hangout Event To Be Released On March

Barbara's Hangout Event is expected to be released on March 17 with version 1.4 of Genshin Impact. Learn about the Mondstadt's number 1 idol and enjoy Mondstadt sceneries with Barbara!

Ending 1: A Holiday In Mondstadt

Ending 2: The Taste Of Hardwork

Ending 4: A Fiery Flavor From Liyue

Poll- Which Ending Is Your Favorite For Barbara?

Completing an ending in the Hangout event can also give you an access to obtain Primogems and unlock some achievements under the Wonders of the World Achievements List.

Whoever wrote this guide is illiterate

here, I can't remember the correct choices but you can indeed get a 3rd achievement

This guide is so confusing, it needs to be e;laborated more -_-