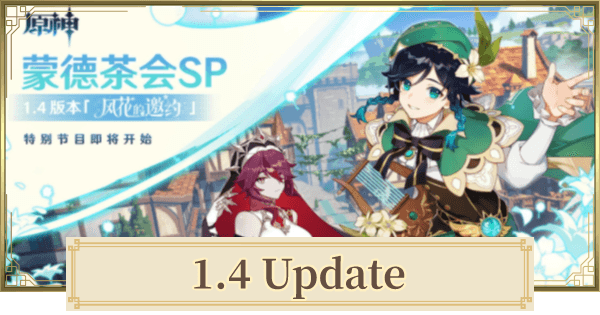 Version 1.4 of Genshin Impact will be released on 2021/03/17 06:00 (Server Time). While the update maintenance is being done, players will not be able to play the game or log in. A primogem compensation will also be given.

An updated preview in English that was released to give an overview of what 1.4 has to offer. It showcases the Windblume Festival, Abyss Herald, and Rosaria!

For better experience, players can pre-install the core version 1.4 files likely 2 days before official release. This allows users to complete the bulk of the update download 6 installations before having to wait for full installation when the update arrives.

How To Preload On PC

In order to preload on PC, you need to start launcher.exe from Genshin Impact Directory. Note that starting "GenshinImpact.exe" from the game installation folder won't show preload menu.

How To Update On Mobile 1

To access the preload, go to the Paimon Menu > Settings > Other > Pre-Install Resource Package. for both iOS & Android uses to initiate.

How To Update On Mobile 2

Will Have Several Mini Games

Windblume festival will be released with new events:

It has been announced that these three characters will join the MC with their own quests! This will be part of an event wherein you can get multiple endings.

Get a little Oceanid pet by challenging the powerful Oceanid in this event.

Challenge your skills and battle different monsters in this event and obtain various rewards.

Thes 2 new SNS-related event was introduced to be part of the 1.4 update. This also will surely excites the players across the globe.

Venti and Childe will get a rerun for version 1.4. Don't miss this chance to get two powerful limited characters!

Rosaria Will Be Released

A new spear and Cryo character will be released in Genshin Impact version 1.4. She will be one of the 4 star in Tartaglia Rerun Banner.

A Continuation of your adventure with Dainsleif will be released on version 1.4... You might be able to meet someone important?

5 new weapons was introduced in the livestream. As of now, there are still no information of their skills.

Several gadgets and items will also be released with the different events that they plan for the version.

Few of them may be introduced through KFC Collab.

As you go through the main quest unlocked in version 1.4, you will battle a boss called Abyss Herald!

The following bug for Ningguang is scheduled to be fixed on version 1.4.

Description is quoted from Mihoyo's official descirption of bug fixes.

Will Rosaria be permanent or just temporary?

Nah, it was announced that Rosaria will be in childe's banner

I thought Rosaria was suppose to be on Venti's banner?