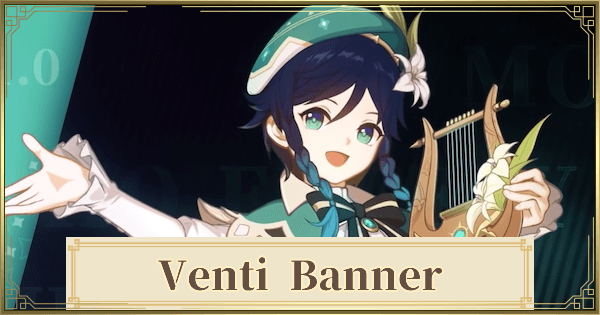 Venti and his banner has been confirmed to return with the release of the 1.4 Update.

With Venti as the main character in the Windblume Festival similar to Xiao to the Lantern Rite Festival, his banner should be closely tied to the event. No exact release date was given, but it will either be before or during the Windblue Festival.

Check Out The Windblume Festival Guide

Should You Roll Venti's Return Banner?

Pull If You Don't Have Crowd Control Characters

Venti and Sucrose are not only amazing supports, they are one of the few characters who can effectively gather enemies while weakening them using the artifact Viridescent Venerer.

Noelle and Razor are great DPS characters which deals tremendous damage using their claymores. If you need claymore characters, it is recommended to pull for these two.

Best Characters In The Venti's Return Banner (Ballad in Goblets)

Venti is a must have character for all players of Genshin Impact. He has a strong spamable Elemental Burst that gathers all enemies in one spot and continuously damage them with Anemo. This black-hole can fuse with other elements making it deal more damage. His elemental skill also has great utility use and is greatly compatible with characters that uses plunge attack for damage.

Sucrose is also a character that can gather opponents in one location while dealing damage. She can also transfer her elemental mastery to other party members which makes her one of the best buff and support in-game.

Razor is a physical scaling DPS that can spread Electro with his skill and burst. He works well with Cryo support and acts as the main DPS of the team.

Noelle is a character that can provide, damage, healing and shields to the team. Her elemental burst extends the reach of her claymore and make every hit Geo making it easier to deal Crystalize reactions.

Razor. I have every 4 star but most of the electro characters, and I also want more fates. Venti would just be a bonus.

I'm waiting for Ganyu Banner. She's the best character for my team set (Diluc Bennet Xiangiu). Cryo dmg and crit are awesome with distance from her bow.

im pulling for sucrose and venti. i need femboy and cute girl. i also need some anemos and im tired of changing Lumine to back to anemo or geo all time, but thats not important. All what matters is cute girl and trap/femboy