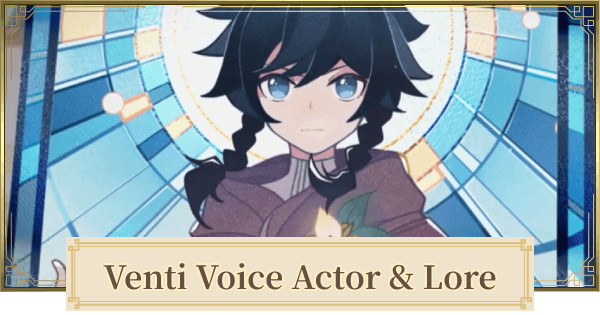 A bard that seems to have arrived on some unknown wind — sometimes sings songs as old as the hills, and other times sings poems fresh and new.

Most Popular Bard Of Monstadt

Venti is a cheerful and free-spirited bard in Monstadt. He likes drinking dandelion wine at the tavern but due to his young appearance, he was declined to be given alcohol. He then decides to play his lyre and ask the audience that liked his performance to buy him a drink at the bar. This made him popular and even won the title "Most Popular Bard of Mondstadt" three times.

However, for some unknown reason, he is allergic to cats so he would always perform in a spot where there are no cats nearby.

Barbatos And One Of The Seven

Around 2,600 years ago, Monstadt was surrounded by impenetrable winds and ruled by Decarabian—God of Storms. Back then, Venti was just a single thread of the thousand winds that roared through the northern lands. During that time, Venti met a young bard who wishes to see birds fly. Venti became friends with the bard and help him free Monstadt from the storm wall. But his friend was one of the fallen during the war in Monstadt and Venti used his friend's appearance and became known as "Barbatos"—the Anemo Archon and one of The Seven.

Venti doesn't need a Vision since he is the Anemo Archon. However, he constructed a fake Vision and gave it the ability to turn into the wooden lyre "Der Frühling."

Venti has also appeared in various in-game quests, such as story quests, world quests, and events in the game. You may encounter Venti in different locations depending on the quest.