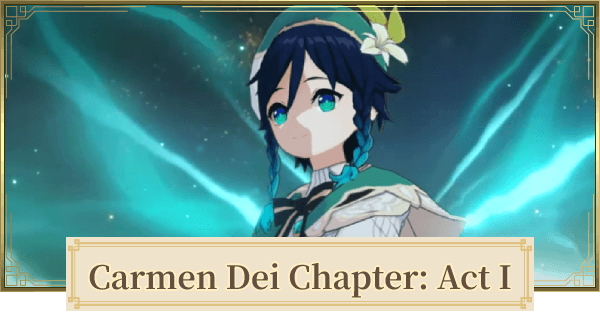 Carmen Dei Chapter: Act I - Story Quest Guide in Genshin Impact. This guide includes what is the quest and how to unlock it, a walkthrough, rewards, hilichurl answers, and more.

Destroy All The Training Dummies

You can use character's skills or burst with area of effects attacks like Xiangling.

Correct Answers To The Hilichurl

What If You Choose The Wrong Answers?

The hilichurl will be mad and you will have to defeat it to get the shield.

Should You Be Trapped in a Windless Land Walkthrough Chart

You can change the time by selecting Paimon's Menu on the upper left > Select the Clock icon > Move the hour hand to your desired time.

A bard that seems to have arrived on some unknown wind — sometimes sings songs as old as the hills, and other times sings poems fresh and new. Likes apples and lively places but is not a fan of cheese or anything sticky. When using his Anemo power to control the wind, it often appears as feathers, as he's fond of that which appears light and breezy.

In Old, Mondstadt transpired the story to be told

Where a tyrant ruled, I met a boy, not that old.

The lyre he played, and for a song he sought

But storm-walls blocked blue sky — he was sincerely distraught.

"I do so wish to see the birds in flight"

Said he, his strong eyes filling with light.

But his voice was lost in the howling wind's churn.

For the whirlwind takes, and gives naught in return.

The true sky, and songs that cageless soar...

Were they not wishes worth fighting for?

So the boy turned, extending his hand:

"Let us cast down the tyrant and his walls from this land."

The young boy raised then the flag of revolt

And I threw myself into freedom's tumult.

Victorious were we who fought to be free.

In the smoke, a despot met his doom

And we watched as his great tower fell none too soon.

And since then never has another worn its crown.

Check Out Venti's Build and Set Up

How To Get Venti?

Venti can be obtained from pulling him in limited-time Wish Banners that feature him.