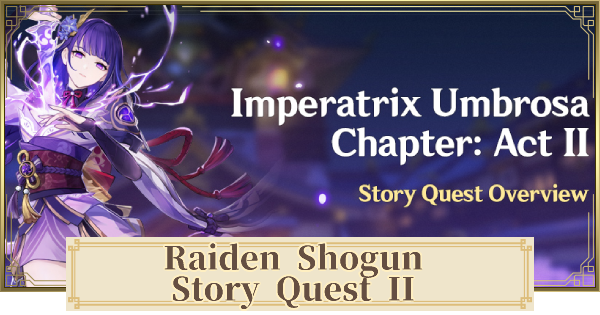 Take note that you will be using Raiden Shogun alone for most battles in this story quest.

You can start Raiden Shogun's second story quest by talking to Katheryne at the Adventurer's Guild in the City Of Inazuma.

4. Look For The Marks Left Behind

11. Head To The Cave Below Grand Narukami Shrine

You will have to fight the Raiden Shogun puppet who has decided to rebel against the wishes of Ei. The puppet must be defeated three times before you can progress the story and fight its final form.

Conserve Your Stamina For Dodging Attacks

The basic strategy is to conserve your stamina so you have enough to dodge her stronger attacks. She will usually be left wide open once she finishes attacking, so be sure to deal as much as damage as you can during that period.

Break the Flower Of Remembrance with Electro as quickly as you can! Failing to break the flower will cause your character to instantly faint, so be sure to destroy it immediately.

Jump To Avoid The Lightning Spears

Once she summons the lightning spears, you'll want to avoid them by jumping at the right time. Be careful of this attack since it can deal a lot of damage!

Use Food For Recovery And Buffs

Food can still be eaten during the fight so try to use them to gain an advantage against the puppet. Try to eat food with defensive properties to reduce the damage you take during the battle.

The Imperatrix Umbrosa Act II was introduced during the 2.5 Livestream and is also confirmed to be released on February 16, 2022.

After completing the Imperatrix Umbrosa Act II, you will be able to unlock Yae Miko's Story Quest that was also introduced during the 2.5 Livestream.

This fight was straightforward with food buffs! Thank you!

Very helpful and insightful! Thanks