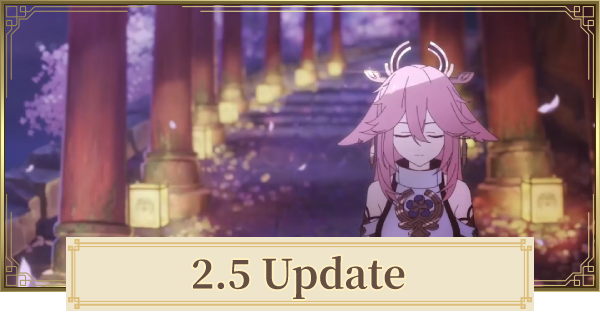 For the 1st phase of the 2.5 update, we will be getting Yae Miko's Banner. This time, Yae Miko will have a standalone banner for Phase 1.

For the second phase of 2.5, Raiden Shogun and Kokomi will have their rerun banners. Both banners will be featured simultaneously!

Remember that the 2-Character Banners will share pity / pull count. Be sure to keep in this mind when pulling for the corresponding banners!

This is the form that the puppet which inherited the Raiden Shogun's authority takes when she is opposing those who threaten Eternity.

It was shown in the livestream that there would be 3 types of these which are the Standard Bearers, Line Breakers, and Defenders. These enemies are seen to wield various weapons and can even create shields for other enemies.

No News About New Areas

There are currently no information about new areas in the 2.5 Update.

In this event, Travelers will be taking on the role of a bartender in Angel's Share to serve up drinks to familiar characters. Obtain various rewards by serving drinks and get an exclusive namecard for participating!

Create your own domains and challenge your friends to clear them in this upcoming event!

Travelers must light up the darkened Enkanomiya using the Bokuso Box and will feature a new 4-Star catalyst weapon.

Get a chance to try out different characters, including 5-star limited-time banner ones, in the return of the Hyakunin Ikki event!

Overflowing Mastery will make its return for 2.5! Travelers will be able to claim 2x the amount in Talent Domains so don't miss out in this event.

No Change To Reset Times

There will be no change to the reset times of the Spiral Abyss and Blessing of the Abyssal Moon. These remain the first and sixteenth days of each month, respectively. The above Spiral Abyss update will take effect from March 1 at 04:00 (Server Time).

These new materials can be obtained from the Magatsu Mitake Narukami no Mikoto Weekly Boss for Version 2.5

It was revealed in the 2.5 Livestream that these materials can be found in the Three Realms Gateway Offering Event and will be added in the 2.5 update.

These other materials were also rumored to appear on version 2.5. However, no other information is known about their use or where can it be obtained.

It is confirmed that Raiden Shogun's story quest will have a second chapter that will be included in the 2.5 Update. This might tie up with her supposed upcoming Boss domain.

Yae Miko will also have her own Story Quest with the release of the 2.5 Update. What the story quest will focus on is still unknown, but it could be related to Raiden Shogun's own story quest.

Two new catalyst weapons will be added in the 2.5 Update.

There's apparently a bug that causes Ningguang's back to be shown differently when using the new Orchid's Evening Gown skin. A fix is confirmed to be added in the 2.5 Update to address this.

How To Get Ningguang Skin (Orchid's Evening Gown) - Looks & Design

will we get hyakunin ikki namecard?

Anybody have news about what would be in the next Gnostic Chorus BP?! (Namecard,...)

im so happy since i alr have kokomi + raiden and yae will be perfect for my team !!!

They will add The Chasm and new Enkanomiya's kinda like tree statue feature in 2.5, we are getting closer to Sumeru