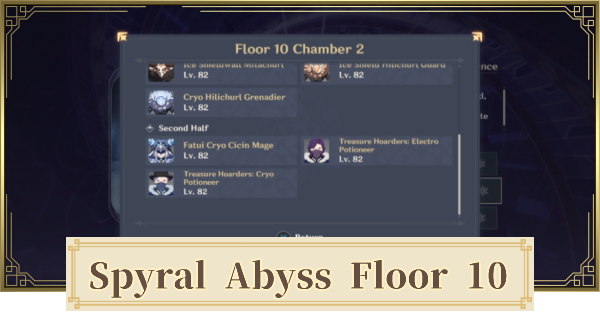 Check this Spiral Abyss Floor 10 Guide for Genshin Impact 3.3. This includes how to unlock Floor 10, tips, enemies, rewards, recommended party and how to get 9 stars.

Due to the Ley Line Disorder, having a Spread/Aggravate-centered will be very strong in this floor. Cyno, Tighnari, Nahida, and Raiden Shogun can fully take advantage of this.

Take full advantage of the Aggravate damage buff with this team comp. Although Tighnari is the on-field DPS, most of the damage will come from Raiden Shogun and Yae Miko. This is due to the Aggravate buff and the shred you get from Kazuha! Tighnari will be able to continuously apply Dendro for Quicken, Aggravate, and Spread.

Another Aggravate team comp, but this time with Cyno and Nahida at the forefront. Fischl will act as a battery for Cyno for high Burst uptime, while Zhongli will protect the team from incoming damage.

Enemies Can Be Pulled With Crowd Control Abilities

You can take full advantage of crowd control abilities in this chamber in order to group enemies together. This will make it easier to set up elemental reactions or hit multiple enemies with Bursts.

Use Edge Of The Arena To Group Vishaps Together

You can clear this stage at a quicker time if your attacks hit both of the Vishaps together. Use the edge of the Arena to group them together, and from there, you can continue to attack!

Defeat The Kairagis At The Same Time

Aim to take out both the Kairagis at the same time. If you only defeat one, the one who's left will regenerate health causing the fight to go on longer.

Focus On The Abyss Mage First

Focus On The Hydro Fatui First

The Hydro Fatui can heal its allies so taking it out first should be your top priority. Once it gains a Hydro aura, either use Pyro, Cryo, or Electro to strip it and easily defeat it.

Stick To The Mirror Maiden

The Mirror Maiden has a tendency to move away from you while the Electro Cicin Mages would teleport to you instead. Take advantage of this to group them together by sticking to the Mirror Maiden.

currently desperately clear floor 10 chamber 2. All the fatui.....Oh my god. I have jean, bennett, and barbara as healers along with a zhongli for sheil but everybody still dies :sob: especially since i need a healer to continue to fuel my xiao

Chamber 3 is by far the hardest to 3 * on all the floors this time round. The 7 minute minimum is brutal.

Chamber 1 has a hydro abyss mage not a cryo one

I don't have Diluc and Klee, and all Low-Ranking characters are low level, how can i make this?