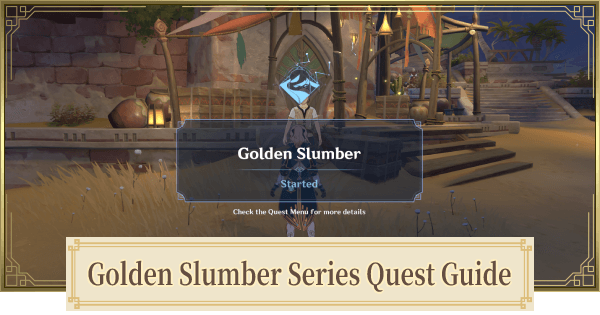 Golden Slumber - How To Unlock & Location

Golden Slumber - How To Unlock

Talk To Bonifaz At Aaru Village In Sumeru

This quest line can be started after talking to Bonifaz at Aaru Village. Since the Golden Slumber Series Quest is in Sumeru, you need to progress through the Archon Quests until you get access to the region!

The Golden Slumber Series Quest starts with Lost in the Sands. Finish it to unlock the succeeding quests shown above.

Lost In The Sands Quest

This is the initial quest of the Golden Slumber Series Quest. Help a group of trapped people and make a way to escape their predicament in Abdja Pit!

Lost In The Sands Quest Guide

An Introduction To Indoor Archaeology Quest

This quest unlocks & starts after completing Lost In The Sands Quest. Explore the ruins and pyramids in the Desert of Sumeru.

The Secret Of Al-Ahmar Quest

Learn and explore the secrets of the gigantic Pyramid that you can find on Sumeru Desert.

Dreams Beneath The Searing Sand Quest

The final quest of the series. You can unlock this quest after finishing "The Secret of Al-Ahmar".

Get Sacred Seals For Primal Obelisk

There are several Sacred Seals that can be obtained as you progress with Golden Slumber Series Quest. These sacred seals are used to activate Primal Obelisks scattered around the desert area of Sumeru.

Get Dendroculus In Secret Areas

Some Dendroculus are located underground and can only be obtained as you progress in some quests since these underground areas are inaccessible initially.

The series itself does not have rewards but each of the individual quest under it has their own rewards.