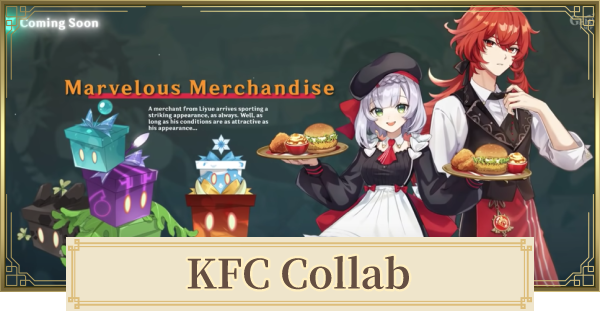 A Different Kind Of Marvelous Merchandise

Because of the demand of players to get exclusive Wings/ Gliders that Chinese servers have, this event is revealed to international servers.

Players can unlock up to 3 recipes by just logging in to Genshin Impact. The new recipes might be closely related to KFC's as part of the event.

Starts On March 8 And Is Exclusive To China

The collab is said to start at March 8, 2021. This event is exclusive for players who live in China. You can buy a chicken bucket with Diluc and Noelle as design.

A red and white wind-glider would be given as a reward for this collab. You can obtain it by claiming the code that will be given together with your order.

Will Also Be Available To International Players

It has been announced that these Windgliders are also scheduled to be distributed internationally. The method, however, is still under investigation.

New recipes can be unlocked by completing the log-in requirements. The exact recipes have not been revealed yet, but they should be new introductions.