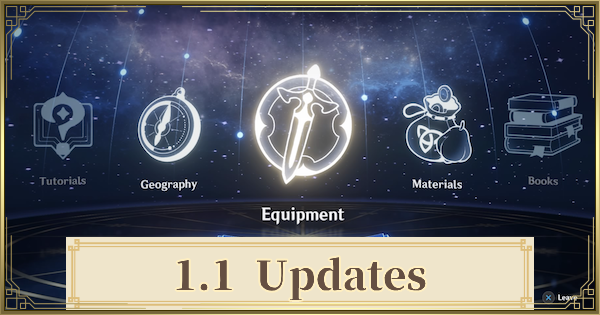 Version 1.1 Has Been Released

Total Of 600 Primogems For Compensation

Upon logging in, players will receive 2 batches of 300 Primogems as compensation for the maintenance and bugs version 1.0.

Version 1.1 saw two new characters added to the game. Check them out below!

> Should You Roll Tartaglia Banner (Farewell of Snezhnaya)?

A Hydro archer that serves as a strong DPS and hydro support. He is the first and only character who changes stance and has two kinds of Elemental Burst and skill.

She is a Cryo user of relatively small stature who is able to heal and provide Cryo support for teammates. A great character that will fit into any teams.

The second official Battle Pass period is also coming alongside Patch 1.1! If you couldn't get your 5000 resin achievement this period, you'll have another chance at it after 1.1 hits!

The continuation of the main story quest was released in ver. 1.1. Find out more about the land of Liyue and accomplish the quest for various rewards.

Several world quests were added for Ver. 1.1. Complete them for various rewards!

After 1.1 hits, a new Event will be added to the game where you can obtain the Hydro using support character Barbara for free! If you already obtained Barbara during previous events, you can get her again and level up her Constellation!

Check Out The Baptism of Song Event Here

Unreconciled Stars is a new co-op event where you will travel alongside Mona and Fishcl. You'll be able to obtain a free Fischl from this, as well as other rewards, such as new Gliders!

This seems to be similar to a previous coop event, the Elemental Crucible, as you'll have to use resin to get rewards.

Check Out The Unreconciled Stars Event In Detail Here

A reward system wherein the player can do quests to raise their Reputation in different countries. As they level up their Reputation Rank, they will receive various rewards such as shop discounts and recipes.

The following gadgets were made available at 1.1. You can craft them after getting their recipes in the battle pass.

You can now see the progress of your exploration in the in-game map.

There are two archive system that was added in version 1.1.

You can view the Attributes, Constellation, Talents and Profile of characters regardless if you have them or not. This can be accessed by clicking the Character Archive from the Menu.

You can view a list of the items you obtain and their details. Tutorials that was unlocked in-games can also be viewed.

The Original Resin cap will be increased from 120 to 160.

Use a total of 1600 Original Resin is one of the hardest weekly mission. From ver 1.1, Original Resin that needs to be consumed will be reduced to 1200.

New missions related to the new Reputation Systems was added in BP missions.

You can now lock equipments so that they cannot be used for enhancement.

With ver 1.1, sorting function became available for Artifacts which will give you a better overview on your artifact inventory.

Equipped Item Will Have A Character Icon

Limits Was Separated Per Item Category

The max amount of item is now separated per type of item.

Boss Is Now Sorted By Type

Instead of being sorted by location, enemies written in Adventurer's Book are now sorted via what type of monsters they are.

The way these monsters dive into the ground and appear somewhere else is changed. Especially when there is water nearby.

A monster called "Unusual Hillchurl" has been added.

1.1 fixed issues that makes the following quest not progress.

Optimization and interaction fixes was done with monster and bosses. Drops not appearing after the defeating monsters are also fixed.

His Burst can no longer gather Whopperflowers hiding in the ground.

Descriptions of several weapons and optimization of other weapons were done.

AR42 will most likely be Zhongli, because his banner is up next.

Reply to: User who claimed as "false content". clearly, info about Inazuma is listed under the title of "Ver. 1.2 & Other Future Confirmed Updates"

please read properly before accusing them. they did state the info is still unconfirmed and will change if confirmed.

*The snow region will be released in 1.2 alongside an event