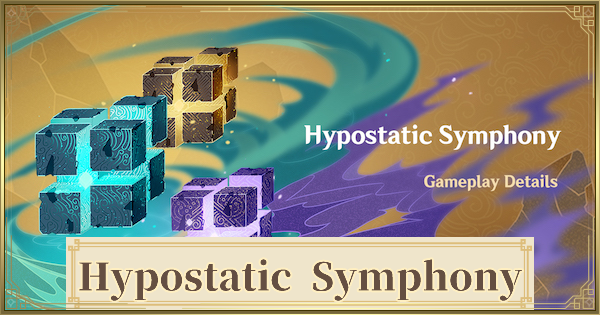 Hypostatic Symphony allows you to battle against "Pure" Hypostasis of different elements. These bosses are not only a more powerful version of the overworld boss, but they also have additional moves that are unique to this event..

Choose Dissonance Buff For Your Team

In this Hypostatic Symphony, you are allowed to choose from different buffs that can provide bonuses while fighting against the Hypostasis.

There is a total of four stages that players can participate but you can get all of the rewards just by completing the Fearless difficulty which is the third one. The succeeding entries are time-locked and become available on the following days.

Each Stage Has Two Modes

It is recommended to use Pyro characters since it is the weakness of Cryo. It can easily melt Cryo shields and inflict heavy elemental reaction damage.

The Elemental Burst of Bennett & Jean can provide great healing as well as remove the debuff caused by Cryo attacks which can slow down your attack speed and movement.

You need to use a Charged Attack from a melee character to break the Cryo Hypostasis' shield with Frostfruits.

When Cryo Hypostasis has low health, it shields itself, starts to throw Frostfruits, and conjures a protective barrier that rotates around it. Besides hitting it with Frostfruit, you can break the rotating barrier with Pyro & Geo attacks.

Stay Near A Heat Source Or Eat Goulash

Similar to when you are in Dragonspine, the accumulation of coldness can decrease your health over time. It is recommended to stay near a heat source as much as possible to avoid coldness buildup or consume Goulash to slow it down.

How To Get Goulash Recipe?

It is recommended to use Hydro characters since it is the weakness of Pyro. It can deal strong damage especially when triggering Vaporize reaction.

The Pyro Hypostasis has 3 Fiery Shieldseed & Pyro shield gauge that can easily be shredded by a Hydro Catalyst with Normal Attack.

Cryo Characters Are The Best Choices

Electro & Pyro can both trigger elemental reactions with Hydro but Cryo is more recommended since it can easily dispel the 3 slimes that the Hydro Hypostasis creates when it is at low health.

Avoid The Bubbles As Much As Possible

There is a phase where the Hydro Hypostasis enables bubbles to appear from the ground and you are entrapped if it gets you.

Block The Heal From Slime

One of the three slimes that the Hydro Hypostasis releases at the very start of the challenge has a halo and sends a heal which can also heal you if you approach it.

Electro & Pyro Are Both Recommended

It is recommended to use both Electro & Pyro for dealing damage against the Dendro Hypostasis since the elemental reactions of both can be triggered right away. While Hydro is great, Dendro Hypostasis is immune from the damage produced by Dendro cores.

Burn The Thorns Around The Dendro Hypostasis

There is a phase where the Dendro Hypostasis bounces several times while it is covered with thorns. You can use Pyro to burn the thorns and expose itself for a chance to inflict damage.

Apart from Primogems, you can get also Shattered Phenocryst upon clearing the challenges which can be used to purchase resources available in the event shop.

You can buy items in the event shop such as Mora, weapon ascension materials, Hero's Wit, & Mystic Enhancement Ore.

Select From Different Variation To Increase & Decrease Your Difficulty

You can do different variations that will increase the difficulty of the boss which will also increase the score that you will receive.

Score More Than 2860 Everyday To Get All Rewards

To be able to claim all the rewards, you need to get a score of 2860 or more for every challenge faced.

This team maximizes the damage that the bonus characters can already produce. The DPS will deal all the damage and the other members serves as additional support and reactors to increase the total damage output.

Accomplish This For More Than 2800 Points!

By defeating the boss under this specification, you will earn enough points that are required to claim all the rewards for the whole event.

Since this variation increases the CRYO resistance of the boss, rather than a Cryo DPS, a pyro like Klee and Xiangling is recommended.

Co-op is available in Violet Lightning Concerto. For those who are having difficulty accomplishing the challenges, ask for help from friends or check the forum below!

Beware Of The New Attacks Of The Boss

Use Elemental Attacks To Destroy The Cores

To quickly destroy the cores, it is recommended to use elemental attacks that are highly effective to electro such as Cryo and Pyro. While other elements work, they destroy the core at a slower rate. Take note however that physical and electro does not deal damage. It is also recommended to save your burst for destroying cores.

This team utilizes the boosted characters to deal maximum damage to the enemies. Xingqiu will provide extra damage while Albedo's skill is useful for dodging the different gimmicks this boss has.

Gain More Than 3000 Points By Finishing This Boss

You will gain enough points for the daily needed score by completing this challenge at this variation. You can opt to challenge for more points!

More Time Is Given Focused

There are a lot of moments in this boss wherein it is not affected by attacks. This is the reason why the maximum amount of time was selected. You can also opt for a shorter time for higher points.

Destroy The Cores To Summon An Wind Pillar

The boss will start off by summoning small anemo cores which can be destroyed by any non-anemo attacks. Destroying this will summon a rising wind pillar that will help you dodge most of the gimmicks.

Stay Close To The Summoned Core

It is pretty difficult to predict when a certain gimmick would start. Staying close to cores while fighting would be ideal to avoid dying though gimmicks. However, since the wind pillar only appears for a certain amount of time make sure to not do not destroy all of them.

Similar to the previously recommended team, this team focused on upping the damage output of the DPS. However, shields has a crucial role in this boss so it is highly recommended to have at least one shield-producing character in the team.

Klee If The Boss Has No Pyro RES Buff

Klee is the preferred DPS if you opt to not pick the variation that increases the Pyro resistance of the boss. In this case, increasing Physical

For solo players, it will take a lot of time to destroy the pillars that will enable you to damage the boss. Increasing the time would give you an easier time in this challenge.

Focus On Destroying The Pillar Where The Hypostasis Is Standing On

Like the normal Geo Hypostasis, you need to focus on the pillar where the boss is at. Destroying the pillar will enable you to damage the boss. You can also use the bullets from other pillars to quickly destroy them.

This can be stopped by destroying all the cores shown in the photo above. However, it is ideal to defeat the boss before this attack occurs.

Remove Pyro & Physical RES If You Plan To DPS With Diluc

The role of Diluc in this variation as a DPS will be severely affected because of the boost. If you want to DPS using Diluc, it is recommended to remove the Pyro and Physical Res in exchange for Cryo RES.

In this stage, you will battle all the previous bosses one by one starting from Anemo then Electro and finally Geo.

All of their moves are the same as the previous days so it is recommended to use the strategies from previous bosses.

Players will be rewarded with Primogems upon defeating the Pure Hypostasis bosses. By completing all challenges, you will receive a total of 420 Primogems!

Getting a score of 14000 or higher at this event will award you with a new Name-card Style.

An event-limited battle pass challenge is also available for the duration of this event. For accruing 10,00 points for the event, you'll get 1500 BP points towards this season.

What Is Hypostatic Symphony?

Every day a new boss challenge will be unlocked. Prepare different teams to fight difficult and different kind of bosses!

Can Be Played Solo Or Co-op

You will be fighting with 7 powered bosses which can be difficult alone but you can ask for your friend's help through multiplayer.

Battle Hypostasis with additional and more powerful moves to collect points. These points can be exchanged for rewards and bounties.

Difficulty Can Be Changed

You get a score depending on how well you performed in the battle and the settings of the boss when you challenged it.

Is Resin Needed In Hypostatic Symphony?

Since Mihoyo announced that events starting from Version 1.2 will no longer need resin, there is a huge chance that this event will not require any use of resin!

The list for stone heart sonata I challenge list is wrong, you just put 2 second halves into one lol. Don't forget to fix it! 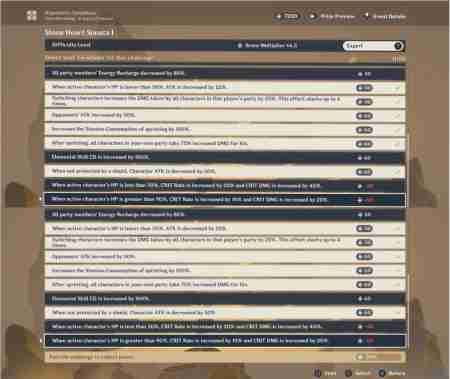