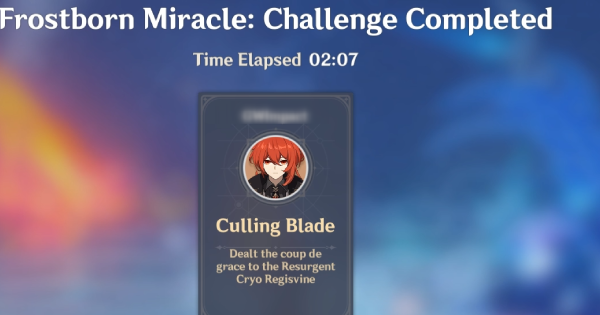 After several attempts, we could finish the Frostborn Miracle Challenge within 67 seconds. Please comment how quickly you could beat the boss at the bottom.

Full Guide Of The Chalk Prince And The Dragon Here

Location Showed In The Map

Upon accomplishing the main quest, check the map for the location of Resurgent Cryo Regisvine. Head there and defeat the boss to obtain Miraculous Essence.

How To Complete The Frostborn Miracle Challenge Within 300 Seconds

For Faster Completion Coop Is Recommended

While it is possible to defeat the boss within 300 seconds in Solo is possible, it is a lot easier to do with when you are supported with multiple players for this boss requires doing multiple gimmicks at the same time.

Characters like Diluc and Klee is important in this battle for you will fight Cryo monsters. However, if you do not have a Pyro DPS, you could just use your strongest DPS.

You will need to dodge a lot in this Boss fight. Characters such as Qiqi which heals you while moving is recommended. Barbara, while she can provide flexible healing, applies wet status and freezes you so it is better to avoid using her.

The boss does not move or change location which makes it perfect for supports that has elemental skill that continuously damage enemies in a certain area.

Shield characters will decrease the damage receive but for quick finishing, support that can deal additional damage should be prioritized.

This item will allow you to easily heal using food without taking a lot of your already limited time.

Goulash will reduce your sheer cold accumulation which will help a lot while fighting this boss because you can focus on dealing damage instead of moving away from time to time for warmth.

Melt Icicles To Start The Battle

To melt the barrier around the boss, defeat the slimes and get Scarlet Quartz. Hit the icicle in that state to melt.

Avoid The Icicles By Walking

At the start and through out the battle, icicles will drop from the sky, avoid them by simply walking. You do not need to dash it will just waste your stamina.

If the boss's core is open for attacking, quickly destroy it by dealing pyro damage to trigger Melt. If you do not use a Pyro DPS, you can kill slimes and obtain Scarlet Quartz to melt the cores faster.

Downed Enemy Is The Best Time For Elemental Combos

When the enemy's core is destroyed, quickly switch to your supports and release their skills and deal damage and elemental combos.

Once the boss recovers from being stunned, it will summon a strong blizzard after a few seconds. Leave a continuously damaging skill and head to the Seed of Winter and destroy it to summon a shield.

Destroying The Core Of The Head Can Stop The Storm

If you destroy the core located at the Corolla of the flower, it will put in a downed state and the storm will stop. This is possible by using an archer or attacking when it headbutts the ground.

One of the missions in Act 4 requires you to defeat the boss within 300 seconds. Doing so will award you with 40 primogems and 20,000 Mora.

Defeating the boss within 300 seconds will award you with 2250 which would increase your BP level to around 2 levels. A must do for premium battle pass holders.

How To Unlock Frostborn Miracle Challenge

Complete the Uninvited Guest Quest during the Act IV phase of the The Chalk Prince And The Dragon Event.

Check Out The Chalk Prince And The Dragon Event Guide

Get the evades down. Rush the crystal during "Overloaded" and shield if you can't make it there. It's do-able.

So difficult. I keep dying and I don't have very good pyro characters to break down the corolla.