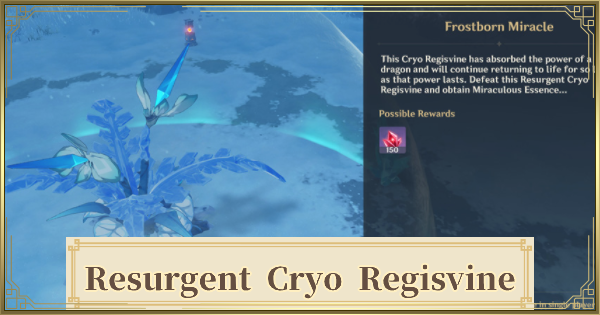 Resurgent Cryo Regisvine - How To Unlock?

Unlock At Act 4 Of The Chalk Prince And The Dragon

More On The Chalk Prince & The Dragon Event Here

The battle will start with the Regisvine protected by a shield with several crystals surrounding it. Melt those crystals by destroying red stones and hitting the crystals while surrounded with its energy.

Destroy The Cores To Down The Enemy

Similar to regular Cryo Regisvine, destroying cores will also down this boss. When its crystal is showing hit it with a Pyro attack to put down the enemy to create an opportunity for combos.

If you do not have a Pyro character in your team, you can also use Scarlet Quartz to destroy cores fast.

Destroy Ice Crystals In The Field To Summon A Shield

While battling the boss, you will encounter a crystal on the ground called "Seed of Winter". Destroying it would make a wide range shield to appear.

Coop Available If Your Having Difficulty

You can challenge this with other players if you are having difficulty playing with solo.

Search For Other Players Here!

The Cryovine will hit the ground with his head releasing 3 waves of Cryo attacks in that direction. Dash to the side to dodge. This attack is easier to dodge when you are close to the boss.

A Chance For Attack

The boss will remain on the ground for a few seconds making this an ideal time to cast attacks and elemental combos to destroy the cores in the boss' corolla.

The boss would deal damage all around him dealing significant damage and blasting off enemies. This often happens while you are in a middle of a combo so shields are useful. To dodge, you can dash away from the boss once it starts moving its head down.

After recovering from down, the boss will summon a blizzard. Destroy the icicle that will appear to protect yourself. When you will not make it, casting a shield will help you reduce the damage you will receive.

Miraculous Essence, an item that can be used in exchange for rewards in the event shop will be dropped by the boss upon defeat. The amount says to scale from the World Level of the player.

Defeat Within 300 Seconds For BP Points

Swiftly defeating the boss will award you with 2250 Battle Pass points which is useful for quickly upping your BP level.

Reader Comments
No thank you 1