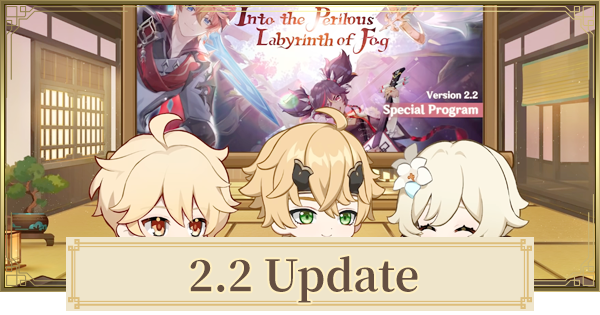 For a better gaming experience, players can pre-install the preload version 2.2 files. This will allow players to complete the bulk of the update download and other files that are needed for installations before having to wait for full installation when the update arrives.

How To Update In Desktop

In the game launcher, you can see the "Game Pre-Installation" on the bottom-left side of the launcher screen. Click it to start the pre-installation.

How To Update In Mobile Part 1

Players can access the pre-installation by going to the Paimon Menu > Settings > Other > Pre-Install Resource Package. for both iOS & Android uses to initiate.

How To Update In Mobile Part 2

Click the "Pre-Install Resource Package" located at the bottm left corner of the login menu.

No new 5-star characters will be introduced in the 2.2 update since it's been revealed that only rerun banners will be featured in this version. Childe and Hu Tao will receive their reruns, while Thoma will be added as a featured 4-star with the latter.

Thoma will be the only new character coming in version 2.2. The Kamisato Clan's faithful retainer has been showcased before as part of the Inazuma Quest line and will finally be a playable character!

Rifthounds and Rifthound Whelps will be added in Tsurumi Island and will be prominently featured in the Labyrinth Warriors event. It comes in 2 elements, Electro and Geo!

The eerie and foreboding island of Tsurumi will be the new island to be added in the Inazuma archipelago. It will be home of the new Rifthounds enemies and since it's a new area, more treasures and challenges will be uncovered.

Finally, new hangout event featuring characters from Inazuma will be added as part of the 2.2 event. Thoma and Sayu will both have their own Hangout events that players can play as soon as the new update is out.

Hangout Events To Be Released

Help out Sakuya, an Inazuma florist, by planting unique seeds in the Serenitea Pot. These seeds will become Dreambloom flowers which you can then exchange for items or send to your friends as gifts!

Tuned To The World's Sounds

Play to the tune of the world and duet with other characters as part of Tuned To The World's Sounds. It's similar to the previously introduced rhythm game, but it does feature new mechanics to change it up a bit.

Probably the biggest event of version 2.2, Labyrinth Warriors will have you work together with Childe and Xinyan to unlock the mysteries of the new domain. Its rewards includes a free Xinyan!

Shadow Of The Ancients

A mysterious Ruin Grader showed itself in Inazuma and to defeat it, you will need to uncover its weakness. To do so, you need to research and help out a Sumeru scholar!

The Ley Line Overflow will also make a return in the 2.2 update. Players can get twice the amount of rewards from Ley Lines during this event. However, you can only get twice the reward only 3 times a day.

Another realm to design and fix as your own! Players can get the new Inazuma-themed realm by getting their Sacred Sakura Tree to level 40.

A total for (7) seven new Inazuma World Quests will be available for the 2.2 game version update, the following quests are indicated on the table below.

The information below are based on rumors & speculations. We will update the item information once it is confirmed.

New set of furniture for both indoor and outdoor are expected to be added during the version 2.2 update. These new furniture sets will be from Inazuma!

pls hutao rerun i saved up before and didnt get her. alr have ganyu and childe

oh no please not Hu Tao rerun, still saving primogems for her T_T, any except hu tao/ganyu T_T

where is my ganyu rerun :(