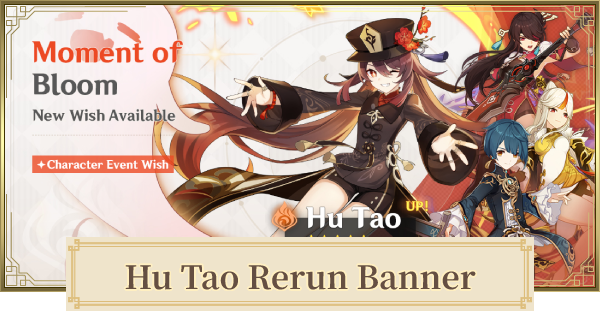 Rerun Banner For Hu Tao is one of the wish banner available for version 3.4 of Genshin Impact. See featured characters, should you pull?, release date and more about Hu Tao Rerun.

Available During The Second Phase Of The 3.4 Update

Hu Tao's rerun banner for version 3.4 that will start at the second phase of version 3.4. It will be released on February 7, 2023.

Will Have A Double Banner With Yelan

Hu Tao and Yelan will have a double banner in the second phase of the 3.4 Update. They will share the same Pity counter and featured 4-stars.

Who Is Hu Tao?

Hu Tao is the eccentric director of the Wangsheng Funeral Parlor. Although she mainly works with the dead, she's known for her cheerful disposition.

Should You Roll Hu Tao's Rerun?

Pull If You Need A Pyro DPS

Hu Tao is known as one of the best Pyro DPS in-game. While her playstyle requires careful maneuver because of her decreasing HP mechanics, she can deal powerful damage with minimal investment.

Xingqiu Is Also Great As A Support

Xingqiu is also an amazing character that is a go-to Hydro support for any character. Gaining constellations of Xingqiu using this banner is also a good option.

Hu Tao is a powerful DPS and is considered as one of the best Pyro hyper carries in the current roster of characters. She does have a high risk, high reward type of gameplay and requires a good shielder.

Bediou's Elemental Burst skill releases a powerful impact that hits multiple opponents at the same time making her a good character that will provide DMG to enemies. At Constellation 2, her support capabilities increases and also her damage.

Ningguang is a powerful Geo DPS that does not rely on reaction and skills to produce multiple and consistent Geo hits. At higher constellations, she can easily compete with 5 Star characters.

So much pain 40 rolls already and still getting the same 4* characters and weapons the Pity roll system can be a pain all the time, though before for me I can pull a 5* in just one roll.