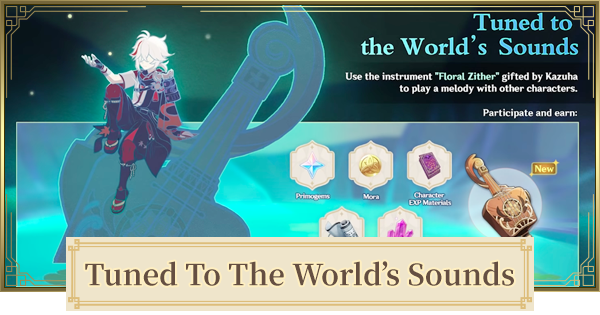 Tuned To The World's Sounds Listening is a rhythm game event in Genshin Impact 2.2. See what is wishes, how to unlock, release date, ranks, instrument to use, & rewards.

A New Rhythm Game Event For 2.2

Tuned To The World's Sounds is a new event similar to the Ballads of the Breeze rhythm game during the 1.4 Update where players will have a designated partner on certain locations and both will take part on playing the game.

An Event Related To Kazuha & Other Characters

Kazuha will be gifting the traveler a Floral Zither for music and this instrument will be an item to be used in this rhythmic game.

Tuned To The World's Sounds How To Unlock & Walkthrough

The quest, "Wishes" refers to the final section of Inazuma's Archon Quest wherein you will once again battle Ei inside the consciousness of Raiden Shogun.

A Music Note Shows Where You Can Play

Each note has a different musical parter which will be unlocked daily.

Every Song Has 3 Difficulties

This rhythmic event has its performances split into Normal, Hard, and Pro.

Your Performance Is Rated In 4 Ranks

This event is divided into four categories which are the Leggiero, Euphonia, Dulcem and Discantus. You will get a rating based on the final score of your performance.

Finish All Difficulties With A Certain Point For Rewards

You can claim various rewards if you reached a certain point for a certain difficulty. You can play the difficulty as many times as you want so make sure to aim for the point with a reward.

Floral Zither can be obtained after getting 600 points on Normal Mode on the stage released during the final day of the event.