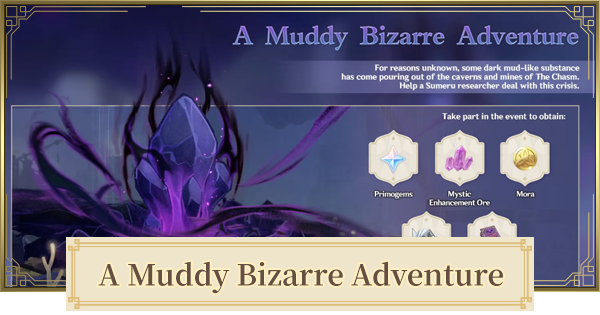 A Muddy Bizarre Event How To Unlock & Location

You can start the "A Muddy Bizarre Adventure" event by speaking with Katheryne in Liyue. She will ask you to investigate the dark mud-like substances in The Chasm.

Defend the activated Pursina Spikes from the monsters that will come to attack it. Complete all of the challenges to finish the challenge.

Enemies Will Be Buffed By The Dark Mud

Dark Mud will ooze throughout the test, requiring players to clear them with the Lumenstone Adjuvant in order to better face the enemies. Note that enemies that come in contact with the dark mud will get an increase in their ATK and DEF.

Charge Your Lumenstone Adjuvant Before Starting The Challenge

While you can easily charge by interacting with the light contraptions around the area, it would be more efficient to start with a fully charged Lumenstone Adjuvant.

Defeat Opponents After Clearing The Mud

To swiftly defeat all of the opponents, it is recommended to use Lumenstone Adjuvant first then attack the enemies. It is possible to defeat them without clearing the mud but it gives more risk and take double the amount of time because of the strengthened defenses of the enemies.

Focus On Enemies Attacking The Spike

The main priority here is to clear the enemies that will come in to attack the Spike. Defeating them faster will allow the Spike to charge continuously.

Use The Lumenstone Adjuvant To Clear The Mud

Clear the mud around the Pursin Spike to allow it to charge faster. This is not a requirement and will just quicken the whole process.

For this challenge, you will need to defeat a specific number of enemies and clear Oozing Concentrations on the way.

Before beginning the challenge, make sure to recharge the nearby Lumenlamp. This will make it easier to refill your Lumenstone Adjuvant while walking through the oozing concretions.

When the oozing concretions appear, use the Lumenstone Adjuvant to clear them before they cover the Spike. Failure to clear them will cause the Spike to malfunction, making enemies more difficult to defeat due to the ATK and DEF buff.

Use The Spoutrock To Get To The Dark Mud Faster

Using the spoutrock will enhance your jumping ability. This allows you to get to oozing concretions quicker without losing charges of your Lumenstone Adjuvant.

For this part, you will need to escort the Pursina Spike through the Chasm. It will be in a Hot Air Balloon, but enemies will come to pose a threat against it! Make sure to protect it so it can get on its way.

Defeat The Enemies Along The Way

Enemies will also randomly appear in front of the Spike. Try to defeat them as quickly as possible! Take note that the enemies' ATK and DEF are buffed.

With the help of the Pursina Spike, defeat enemies to further clean the Chasm of the Oozing Mud. The Pursina Spike will not only clear the mud, but will also help in defeating the enemies.

Defeat The Enemies As Fast As Possible

To earn points, use the Pursina's Spike to defeat your opponents and clear the dark mud within the time limit. Defeating more powerful opponents will earn you more points than usual.

A Muddy Bizarre is a new upcoming event that is said to be related with the mud substance under The Chasm & the Pursina Spikes. It's said that it is similar to the event Shadow Of The Ancients.

It was revealed as a new event for 2.7 Update, however the release date was not disclosed during the 2.7 Livestream.