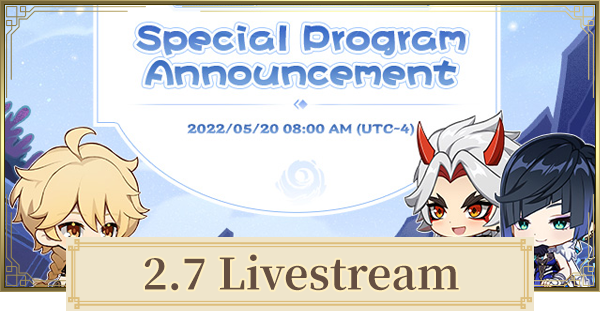 2.7 Version livestream was scheduled on May 20, 2022. This was officially announced by Official Genshin Twitter.

Dear Travelers,
The special program for #GenshinImpact's new version will be on the official Twitch >> 5/20 at 8AM (UTC-4)!
>>>https://t.co/iSfDaDRH9w

Yelan and Kuki Shinobu was introduced first via Genshin Impact's official account and it is said to be released on the 2.7 Update.

Teyvat consists of Seven (7) nations, which means it is likely that Mihoyo will introduce tons of characters in the long run. Some might be included in 2.7 update while some may not. Check back to get more updates regarding this!

It is officially announced that for the 2.7 Update there will be a double character banner! A back to back with the new Hyrdo character Yelan and the well known adepti, Xiao.

The character banners for the 2.7 Update Phase 2 will be an Arataki Gang reunion! It will be the head of the gang, Arataki Itto and his very own deputy, Kuki Shinobu.

A new upcoming new event that is similar to the Ballads of Breeze (Rhythm Game) in which players will be using a drum as the main instrument.

Core Of The Apparatus

Core of the Apparatus is a new event that in the upcoming 2.7 Update. This event is about collecting different materials and exchange them to a furnishing blueprint by using a device created by a merchant from Fontaine.

A Sumeru Researcher will ask for the traveler's help regarding some issues circulating under The Chasm. It will require players to clear muds, activate and defend the Pursina Spikes.

Perilous Trail Archon Quest Interlude Chapter is a new archon quest included on the upcoming 2.7 Update. Players will be investigating the underground Chasm and its past anomalies together with Itto, Xiao, Yelan, Yanfei, and Kuki Shinobu.

Umbrabilis Orchis Chapter: Act I will be Yelan's own story quest. It will be available for the 2.7 Update.

It was revealed during the 2.7 Livestream that Kuki Shinobu will be having her very own hangout event! Participate to this event and earn various rewards!

Material Collector is a new event exclusive gadget that can be equipped during the Core Of The Apparatus Event. This is a device will be used to collect the required materials in order to create furnishings and other materials.

Material Collector Location & How To Get

Dawmn I'm f2p and farmed every single primo in my world and I really needed those from livestream lol. Pity 65 garanteed. Guess no Ayaka this time either.

is this April 29th Asia time or Europe time??