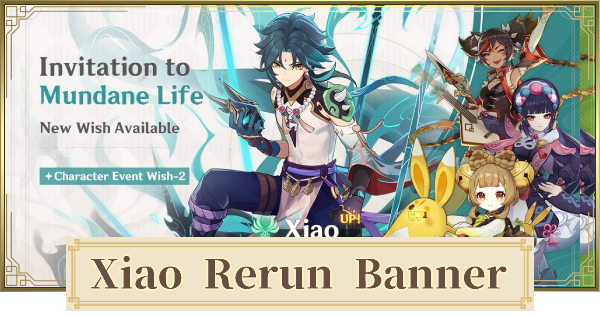 Genshin Impact
Rerun Banner For Xiao 2.7 - 4 Star Characters & Is It Worth It?

It was announced in the 2.7 Livestream that Xiao will have his second rerun in the first phase of the 2.7 Update. The banner is scheduled to be available on May 31, 2022. The 4-star characters that will be featured are still unknown.

One of Liyue's mighty and illuminated adepti, also known as the "Vigilant Yaksha." He was ordered to protect Liyue from the other demonic entities or spirits that would dare destroy the peace of Liyue.

Is Rerun Banner For Xiao worth it?

If You Need An Anemo Carry

Xiao is the only Anemo fully DPS-focused character currently in the game and he's great on what he does. Fully built, Xiao can deal huge damage in quick succession to multiple enemies using his Burst. If you need an Anemo carry, pull for him, but do note that his Supports are very limited.

Xiao has one of the highest damage in the game due to the large ATK buff his Burst gives him. Even though he's an Anemo user, he doesn't rely on Swirl, but instead uses his raw Anemo damage to shred through enemies while his Burst is active.

Yanfei As A Pyro DPS & Shielder At High Constellations

Yanfei is a decent Pyro DPS on its own but at high constellation, she can also produce shield that is powerful enough to defend from enemies attacks. Being a catalyst, she has access to Thrilling Tales Of Dragon which enables her to be a powerful support too.

Noelle For Any Role

Noelle is a very flexible character that can play as a DPS, Shield support or a healer when given enough investment. At C6, she becomes a monster DPS that can even match 5 star DPS characters.

Its more likely that xiao will get a rerun at the start of 2.4 because the new year. Jan 4 xiao Jan25 shenhe. Because xiao has to do with Chinese new year and the lanterns