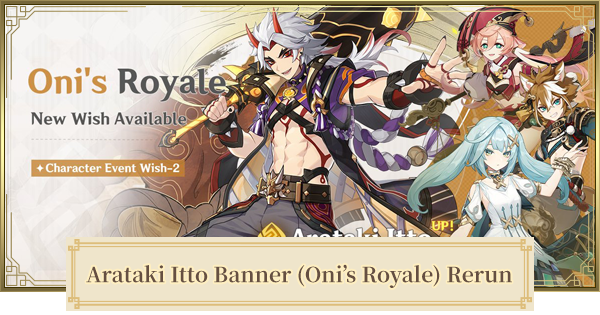 According to the 3.3 Livestream, Itto and Scaramouche (Wanderer) will be having a double banner for the Phase 1 of 3.3 Update.

Who Is Arataki Itto?

Arataki Itto is known as the head of the Arataki Gang. He may look intimidating at first but Itto is a one stylish, goofy and sentimental guy despite of his strong physical features.

Should You Roll Itto's Rerun?

Pull If You Want Him As Main DPS

Itto is one of the recent addition to the Geo family, wielding a Claymore weapon. Itto deals with monumental Geo damage from his Elemental Burst. His ATK-boosting skills is scaled through his Defense.

Has A Lighter Movement For A Claymore

Arataki Itto's movement is swiftly light for a Claymore wielder thus making him a lot smooth to handle in game, compared to other claymore characters.

Faruzan's Elemental & Burt skills can be a good support character since her skill can decrease the enemies' anemo resistance and at the same time supply damage buff to party members. Faruzan's charged-aimed shot has the perk of crowd control which can be useful in battle.

Between Itto & Wanderer (Scaramouche), Which Will You Pull?

Arataki Itto's skill summons a creature called Ushi, that provides support by taunting enemies. Once it takes damage, Itto gains 1 stack of Superlative Superstrength. His elemental Burst will give boost towards his attack speed and DMG while in combat.

Her charged attack can provide a vortex wind skill, making it useful to pull nearby enemies. Her Elemental Burst deploys Dazzling Polyhedron that deals with an AoE DMG, which also decreases its opponent's anemo resistance, and at the same time gives DMG buffs to party members.