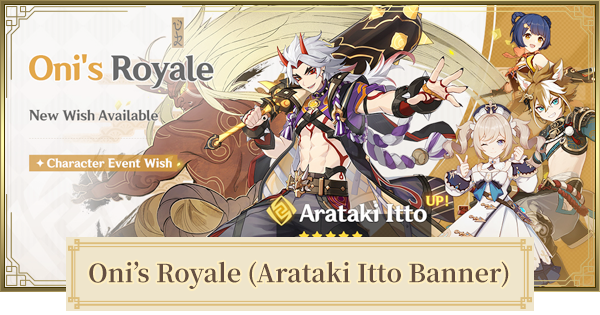 Should You Roll Arataki Itto's Banner?

Arataki Itto is a new Geo Claymore character that deals with monumental Geo damage from his Elemental Burst and his ATK-boosting skills is scaled through his Defense. Itto's movement is swiftly light for a Claymore wielder thus making him a lot smooth compared to other claymore characters.

Gorou is an amazing support that will definitely help buff the team's DEF and resistance. Xiangling is a good sub DPS that will provide a very powerful Burst. Barbara will be in charge of healing support. it is recommended to pull if you need a flexible support.

Arataki itto's skill will summon Ushi similar to Guoba, it gives Geo DMG towards the enemies. His elemental Burst will give boost towards his attack speed and DMG while in combat.

Xiangling summons Guoba that deals with pyro element. Her burst stays even changing a character thus making her an amazing Pyro support alongside her swift attacks that also makes her function as a sub-DPS.

Xiangling can also be obtained in the first half of playing Genshin Impact by completing the Floor 3, Chamber 3 of the Spiral Abyss

Barbara is a healer that easily applies the Wet status to opponents and herself. She can produce huge amount of heals with her elemental burst and can transfer heals using her elemental skill.

Barbara can be obtained as a free character on the first half of the game, by reaching Adventure rank 20.