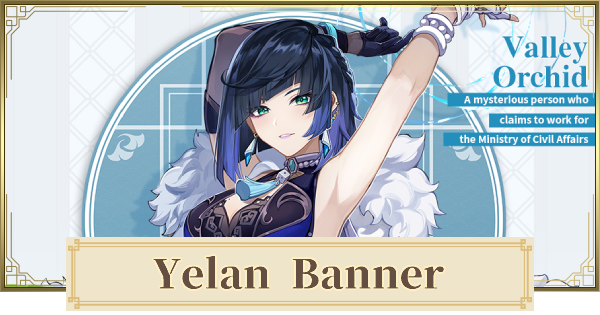 Genshin Impact
Banner For Yelan 2.7 - 4 Star Characters & Is It Worth it?

Yelan has been officially announced as a playable character in the 2.7 Livestream. She, along with Xiao, will make their debut in the 2.7 Update!

Yelan is a mysterious figure, showing up to save the Traveler from the Ruin Serpent during their exploration of The Chasm. What really amps up the mystery is that she saved the Traveler without actually revealing herself to them.

Try your luck and see if you can pull Yelan from our Yelan Banner Gacha Simulator here!

Yelan is a versatile off-field Sub-DPS. Able to apply Hydro with Elemental Burst even if she's off the field, she can easily fit into Hydro reaction-specific team comps.

Yanfei As A Pyro DPS & Shielder At High Constellations

Yanfei is a decent Pyro DPS on its own but at high constellation, she can also produce shield that is powerful enough to defend from enemies attacks. Being a catalyst, she has access to Thrilling Tales Of Dragon which enables her to be a powerful support too.

Noelle For Any Role

Noelle is a very flexible character that can play as a DPS, Shield support or a healer when given enough investment. At C6, she becomes a monster DPS that can even match 5 star DPS characters.

Pull For A Hydro Off-Field DPS

Yelan's Elemental Burst makes her an amazing Hydro off-field DPS. Being able to apply Hydro and provide additional damage while not being on the field, she can increase the DPS of a team with little effort.

Will Work On Most Hydro-Reaction Team Comps

Her kit makes it so that Yelan can work on most Hydro-reaction team comps. Since her Burst is an off-field ability, it's pretty easy to slot her in with most main DPS characters.

Fills In The Role Of Xingqiu For Teams

What makes Yelan a recommended pull is that she can fill in the role of Xingqiu in most team comps. He used to be an unmatched character in his role and abilities and with Yelan, you can fill in his role for another team.

hopefully thoma will be on this banner, I really need him