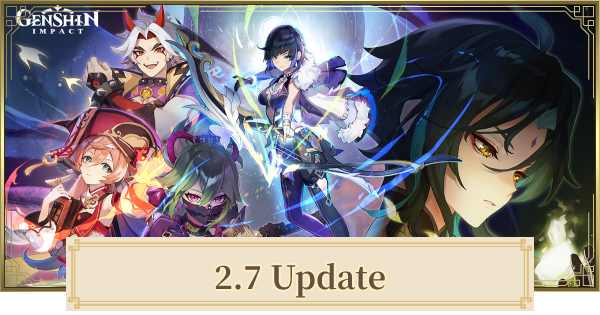 It was officially announced by Genshin's Official Twitter that the start of the maintenance for the update is on May 31, 2022, 06:00 (UTC+8) and is estimated to take 5 hours.

Mihoyo just officially announced that 2.7 Update will be postponed due to a project progress. They will be giving away compensations to players every week in order to make amends.

All Character Banners For 2.7

Yelan and Xiao will be available for pick up during the first phase of the 2.7 Update. In the second phase, Itto will have his first rerun banner which also includes Kuki Shinobu.

Yelan will have her banner up on the first phase of 2.7 along with Xiao. She was revealed to be a Hydro DPS character who can also act as a great Support.

Kuki Shinobu will receive a huge drop-rate boost in Arataki Itto's banner during the second phase of Version 2.7. She was revealed to be an Electro Support character.

Travelers will need to constantly defeat enemies in a challenge domain. You will also be able to use trial characters for this event. Complete the event to obtain Fading Twilight, a free 4★ bow.

The Arataki's Great And Glorious Drum event is a brand new rhythm game with drum mechanics. Unlike the previous rhythm game events, you will also be able to make your own beatmaps by using the note editor!

Core Of The Apparatus

In this event, travelers will be able to create their very own robot which can be placed in the Serenetea Pot! Obtain the Material Collector gadget from the toy collector and perform the necessary steps to create the robots.

Core Of The Apparatus Event Guide

Help Hosseini resolve the dark mud-like substance crisis in The Chasm. Travelers will need to activate the Pursina Spikes to purify the surrounding area.

A new Archon Quest will be available for Version 2.7. Aside from the Archon Quest being part of the Perilous Trail event, it will also contain a new challenge gamemode.

Yelan's Story Quest "Umbrabilis Orchis Chapter: Act I" will be available once the 2.7 Update is released.

Learn more about Shinobu's Past and the Arataki Gang in her Hangout Event. Participate in this event to earn various rewards!

A Sumeru citizen seeks to learn more about cooking in Liyue. Find him in the Wangshu Inn's ground floor and help him out!

Tips were now added to high-level domains to assist travelers in picking the right team composition. This includes suggestions on how to quickly defeat enemies in the domain and strategies to efficiently clear it.

Players can now see a talent priority recommendation based on the entire playerbase's data.

Players can also see the main attribute usage statistics for each artifact slot.

No News About New Enemies Or Bosses

There are currently no new boss or enemies mentioned for the upcoming 2.7 update.

No News About New Areas

There are currently no new areas or domains mentioned for the upcoming 2.7 update.

Aqua Simulacra is revealed to be Yelan's 5★ signature weapon, while the Fading Twilight is a free 4★ bow that can be obtained in the Perilous Trail event.

Material Collector is a gadget that is said to be used by players in the Core Of The Apparatus event. It is used to create special robot furnishings that can be placed on the Serenetea Pot.

Material Collector Location & How To Get

During the 2.7 Livestream, Glowing Gem was introduced together with Fading Twilight Bow. It is likely that the Glowing Gem is a refinement material.

I been playing since version 2.6

cant wait for kazuha and itto to come back

I’m willing to wait on wishing for months until Zhongli runs again!