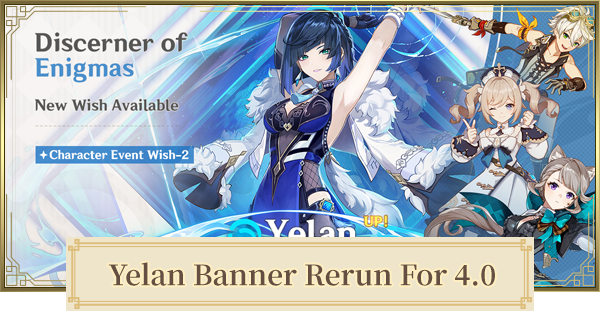 Rerun Banner For Yelan is one of the wish banner available for version 3.4 of Genshin Impact. See featured characters, should you pull?, release date and more about Yelan Rerun.

Releases On The Second Part

Yelan's rerun banner for version 3.4 that will start at the second phase of version 3.4. It will be released on February 7, 2023.

Will Have A Double Banner With Hu Tao

Yelan and Hu Tao will have a double banner in the second phase of the 3.4 Update. They will share the same Pity counter and featured 4-stars.

A Special Intelligent Officer that works under the Ningguang. She's a mysterious figure and keeps her distance from other people. She is the secret owner of the Yanshang Teahouse.

Should You Roll Yelan's Rerun?

Pull If You Need A Hydro Off-field DPS

Yelan is a great off-field Hydro applicator and damager. She's very versatile and can fit most team comps that require Hydro application.She can also increase the damage of the on-field DPS making her an amazing Sub-DPS and a support.

Try Your Luck With Our Yelan Gacha Simulator

Try our Gacha Simulator and test your luck with Yelan's Banner. You can also share the results to your friends.

Yelan is a versatile off-field Sub-DPS. Able to apply Hydro with Elemental Burst even if she's off the field, she can easily fit into Hydro reaction-specific team comps.

Bediou's Elemental Burst skill releases a powerful impact that hits multiple opponents at the same time making her a good character that will provide DMG to enemies. At Constellation 2, her support capabilities increases and also her damage.

Ningguang is a powerful Geo DPS that does not rely on reaction and skills to produce multiple and consistent Geo hits. At higher constellations, she can easily compete with 5 Star characters.