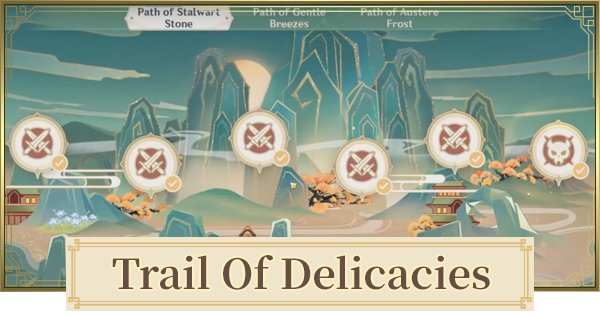 1. See The Starting Point By Ticking Trails Of Delicacies On Event Page

You can pick a Trail to challenge from the event page. There are three trails and each are unlock every three days.

2. Defeat The Opponents In The Stated Location

Boss Opponents Will Have A Buff

Each Boss in the camp will have a buff. Make sure to work against the buff for faster clearing.

3. Use The Air Current To Move To Next Location

After defeating enemies in the location, an air trail will be summoned. Ride that trail to arrive to the next location.

You Need To Finish All Locations

To accomplish the challenge and unlock the next trail, you must finish the previous trail consecutively.

5. Submit Dishes For Buffs On The Next Trail

Each camp consists of leaders that are affected by buffs, and this is where players can submit dishes in order to gain a corresponding Trail Comfort, or also known as character buffs.

Trail Of Delicacies release date is not yet confirmed by Mihoyo, but since it is included on the upcoming 2.1 Update, it is is expected to be on September 1, 2021.

Trail Of Delicacies How To Unlock & Walkthrough Chart

Trail of Delicacies is a part of the Moonlight Merriment (Moonchase Festival) that will be available in the upcoming 2.1 Update release.

Players will be tasked to locate or navigate enemy camps across Teyvat and challenge different monsters. After defeating each monsters, a chest will appear and opening it will give you primogems as rewards.

One thing is for sure, since it is related to the Moonlight Merriment (Moonchase Festival), this event will kick off in the Liyue nation.

After finishing an enemy camp, a chest will appear. Opening it will give you 10 primogems. In the final stage, 50 primogems will be given making you receive a total of 100 per trail.